Going to the Races 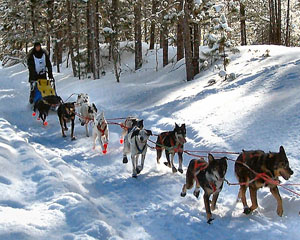 Saturday, January 10, 2008 dawned cloudy and a bit chilly, with temperatures averaging about fifteen degrees, Farenheit – a little colder inland from the residual warmth of still partially-frozen Lake Superior. My wife Cheanne and I were up early because we were among the small army of mushing fans who donate time to help ensure that the many dogsled races around northern Michigan come off as smoothly as possible each winter. (The term "mush" derives from the French word "marche" – "to march.").

Our task today was to man one of the checkpoints where the 63-mile race’s course made a short dogleg onto remote County Road 510, about 20 miles from the starting gates. As with every race, there would be volunteers posted at each road crossing and at points where a musher might get misdirected (it’s not uncommon for drivers to get onto a wrong trail in the vast forests of the Upper Peninsula). We were there to record the time when each contestant passed, and to make certain they all turned in the right direction. We’d be outside all day in temperatures that wouldn’t reach 25 degrees farenheit, so we ate a good breakfast and dressed warmly.

We arrived at the Rainbow Lodge, where the races would begin, under a sky filled with dense gray clouds that were driven across it by a subzero wind. It was always breezy here at the starting gates, between Hemingway’s Two-Hearted River and the the shore of Lake Superior, and on this frigid morning everyone was bundled up warmly. Heavily gloved and mittened hands wrapped around steaming cups of coffee and cocoa, and every exhaled breath created a small wispy cloud in front of its owner’s face. It didn’t seem to be a place where hundreds of people would congregate to have a great time, but here they were, people from every age group and a multitude of occupations, gathered to do just that.

In fact, there were six races being held today; first to start was the longest, the 63-mile 12-dog Pro – the one Cheanne and I would be working. Next was the 42-mile 8-dog Pro, then the 28-mile 6-dog Sportsman, and the 8-mile 4-dog Sportsman. Finally, there was the 4-mile 2- or 3-dog Youth class, and the 8-mile 1- or 2-dog Skijoring event. With a combined purse of only $7,500 for both Pro classes, none of the the mushers was there for the prize money. Like every dogsled race, from the legendary Iditarod to the Mackinaw Mush, even the winning-est teams and drivers knew they had no chance of recouping the money they’d spent just getting there. The dogs don’t stop eating in summer, nor can a serious contender stop training his quadruped athletes just because there’s no snow. Yet these racers – and their huskies – are every bit as competitive as any driver in NASCAR, even if companies like Pepsi and Kodak haven’t yet taken an interest in putting their logos onto a dogsled.

So why do they do it, these mushers and the huskies who thrive on pulling them fast through rugged wilderness in temperatures that some would describe as brutally cold? They do it for love of the sport – and that isn’t merely a worn-out cliche’ when it comes to dogsled racing. These dogs are bred for what they do, and you need only to see them leaping enthusiastically into the air at the starting gate to understand that they live to race as much as any thoroughbred horse.

And so do the mushers who drive those huskies. No human could love a piece of machinery so deeply as sled drivers adore the furry living engines that haul them at a flying pace through frozen forest. The feeling that goes with riding the runners of a speeding dogsled, hearing no sound but the shooshing of snow and the panting of dogs doing exactly what they want to be doing is nothing short of exhilarating. A driver becomes part of the team, and that’s a thrill that defies words, especially when experience polishes them all to almost perfect choreography, where the dogs know what to do and when to do it in unison. The driver knows when to lean, brake, or jump off the runners and push the sled from behind, and you’d think they were all connected telepathically. Watching a well honed team, a finely tuned sled, and a seasoned musher working together in harmony is like seeing a ballet on powder; it’s a beautiful thing to behold.

Maybe because it is such a profit-less labor of love, dogsled racing is one of the few spectator sports that fans can still watch without paying admission. Lack of a large purse doesn’t diminish the proud competitiveness of the racers, or the serious professionalism of race officials. The dogs are treated with even more concern than some human athletes, and the noise made by huskies who would choose being hitched to a sled over eating a rare beefsteak (that’s not an exaggeration) is sometimes deafening. The air fairly hums with excitement as everyone roots for their favorite team, because to these diehard fans every mushing race is a spectacular event.

As one of the snowiest places south of Canada, northern Michigan has become a nexus for mushers of all aspirations, from Sportsman-class sprint racers to the most dedicated Iditarod pro – in fact the "U.P. 200" race is a qualifier for the Iditarod. If you’d like to attend one of the numerous races held throughout northern Michigan, check out the following internet links:

Len McDougall is author of multiple books including: