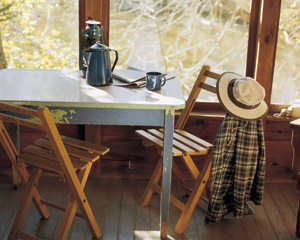 Through our closed bedroom windows I could hear the muffled sound of the waves beating on the shore. I peeked through the curtains and saw the dead birch tree a few feet away. It seemed to be standing straighter, proud to be there. Perhaps it felt that it belonged once again, now that the still-living hardwoods alscoffeo were without leaves.

Staggering to the bathroom absent the ballerina-like grace I would display after a hot shower, I saw my reflection in the mirror. My morning hair looked like a bird nest, not unusual in the dry air of November.  I tell my wife that particular hair style is an acquired taste. She wants to know how much longer she will need to acquire it.

After getting my hair under control, and under a hat, I drove to the Village of Indian River to get the daily papers. In route I tuned the radio to a golden oldies country music station. My cold-inspired gravelly voice seemed to me to blend well with the various male artists.

I purchased the Detroit and Traverse City papers at Pat & Gary’s party store. Outside were bags of carrots and corn, unsold because of the chronic wasting disease inflicting deer.

I went next to Ken’s Village Market, where I could have bought newspapers but I have a ritual of getting them at Pat & Gary’s. I like going there. The ladies behind the counter are usually friendly, managing even to say hello when they are in the midst of eating a donut or a slice of pizza. Several “locals” go there and one young hunter was signing the registration sheet for the deer pole, optimistic that he would be successful.

At Ken’s I bought items we probably did not need. In my defense, November commences the “hunkering in” time when you can never have too much soup, sugar, cereal, flour, syrup, canned vegetables, coffee and bottled water in the pantry.

Ken’s and Pat & Gary’s say “Indian River” to me, as do Vivio’s and Brown Trout restaurants and McClutchey’s Clothing Store. On a good day at Ken’s I’ll catch a young checkout girl staring at me. On a bad day my wife will catch me staring at the young checkout girl. One time, during the middle of winter, a customer called loudly to me from three aisles over to tell me she had seen my “butt marks” on the cross country ski trails at Wildwood, south of town. And yes, you only make butt marks if you are falling down.

On my return to our house on the eastern shore of Burt Lake, I could see white caps on the lake. It was one of those days which did not agree with itself. It was grumpy. It had a split personality.

Snow squalls traded places with sunshine. Over and over. The one constant was wind.

Large waves from two directions, northwest and southwest, seemed to collide on our eastern shore, like siblings trying to be first going through a door. Was I mistaken? How could the waves come from different directions? Perhaps on a lake as large as Burt that is possible. Following breakfast I stored our shivering Adirondack chairs in the basement and secured the foul weather curtains on the porch. To help ward off cabin fever we sought an adventure. Two days previously we had driven to Petoskey so we decided to go to Cheboygan. The wind was at our backs as we passed in and out of sunshine while driving along the western shore of Mullett Lake on highway 27. The west side of Mullett was its usual calm.