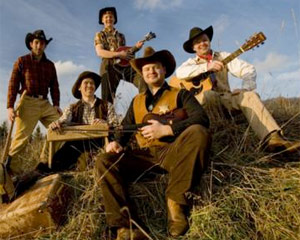 Hailing from the cold, rural area of northern Ontario, comes  this sizzling hot new band of pickin’ and grinnin’ cowboys. The Wild  Turkeys fun stage presence and energetic sound has recently been  coined as “Swamp Stomp Country”. Armed with fiddles, mandolin,  guitar, bass, harmonica, a suitcase and tin can percussive  contraption, and luscious four part harmonies, the Turkeys win over the hearts and ears of audiences everywhere.

This gang of brothers first came together as a band in the  winter months of 2006 and quickly formed a stronghold in the Sault  Ste. Marie Algoma region. Now touring frequently, the Turkeys follow  a busy schedual of playing festival dates, house concerts and small  venues.

Over the past two years the The Wild Turkeys have shared the  stage with artists such as The Cowboy Junkies, Prairie Oyster,  Creaking Tree String Quartet and Washboard Hank. They blend masterful  classical technique with a youthful and vibrant approach to old time  country. In April 2007, they released their first independantly  funded, original album entitled “Unplucked”, which gained  nominations from the Northern Ontario Music and Film Awars (MFM) for  “Best Album” and “Best Songwritter”. In April 2008, they  successfully released their second, full length album,  “Suspendered”.

The Wild Turkeys are bringing their unique brand of “Swamp  Stomp Country” to national and international audiences. "…….The Wild Turkeys have proved themselves worthy of a place next to my  Johnny Cash and Hank Williams recordings, while not taking anything  too seriously….." Donna Hopper, Editor of Arts & Entertainment, SooToday.com.

Union Street Station’s Early Show concert series is delighted  to be hosting a afternoon performance by The Wild Turkeys.  With  their unique  brand of "Swamp-Stomp Country"  music,  Union Street  will be awash with some foot-stomping, turkey trotting, good fun. The performance is set for Sunday afternoon January 11th, 2009 at 5 p.m. at Union Street Station.  Tickets for this smoke-free concert are $15 in advance and $20 at the door.