The Trip to Hiawatha 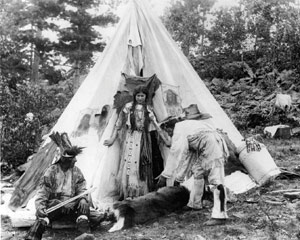 Henry Wadsworth Longfellow never visited the land at the eastern edge of Lake Superior where his Song of Hiawatha was rooted. But a half century after his famous poem was published, his daughter, Alice Longfellow, received an invitation she couldn’t resist.

Alice Longfellow, daughter of Henry Wadsworth Longfellow, was 50 years old in the winter of 1900 when the Indians came to call. “Grave Alice,” as her famous father referred to her in his poem “The Children’s Hour,” hadn’t strayed far from the family home, Craigie House, in Cambridge, Massachusetts. Never married, she lived in the Georgian mansion all her life, and mostly alone since her father’s death in 1882. Her days were full enough—her sisters, Edith and Anne Allegra lived with their families close by—and as befit the well-educated daughter of America’s beloved bard, Alice was active in cultural and liberal causes of her time. She helped found Radcliffe College and was instrumental in preserving George Washington’s Virginia home, Mount Vernon.

Still, Alice dwelled with the ghosts of her storied childhood. The parlor echoed with the conversations of her father and his friends—Ralph Waldo Emerson, Nathaniel Hawthorne, Charles Dickens (who’d once joined the family for Thanksgiving dinner) and Oscar Wilde. And even the comfort of the parlor antiques couldn’t soften the tragedy that erupted in that room when her mother, Francis, lit her clothes on fire while using hot wax to seal locks of her children’s hair in a packet. Francis died from her burns a few days later.

But these were not apparitions coming up the walk this winter’s day, past the circle of elms, to the stately doors of the Longfellow home. They were George Kabaoosa and his friend, Wabunosa, Ojibwe, Indians from Sugar Island in the St. Mary’s River, which connects Lake Superior and Lake Huron and is a border between the United States and Canada. Alice knew their home as the land of Gitche Gumee, the Big-Sea-Water, names that her father had made famous in his poem The Song of Hiawatha—some of it written as she and her siblings shot marbles on the diamond-patterned carpet in his study.

It was Alice’s father’s poem that brought Kabaoosa to Craigie House. At the dawn of the 20th century, the poem was widely regarded as the nucleus of a body of genuinely American literature. But to the Ojibwe, The Song of Hiawatha was a singular source of solace in the loss of their ancient culture. As the descendant of a great Ojibwe family it had fallen to Kabaoosa to finally thank—if not Longfellow—at least his family.

Kabaoosa was a grandson of the storied Chief Shingwaukonce (sometimes shortened to Shingwauk), a warrior, politician, shaman, orator and fierce defender of his people’s culture. Shingwaukonce died in 1854—coincidentally, the year Longfellow wrote Hiawatha—but his son Buhkwujjenene carried on his father’s mission to preserve traditional Ojibwe culture. It was a cause lost as fast as Indian children were shipped off to government boarding schools, where they were stripped of their language, religion and customs. In the face of this cultural genocide, Buhkwujjenene told the legends to Henry Schoolcraft, an Indian agent and ethnographer who had married into the Sault Ste. Marie Ojibwe. Buhkwujjenene knew that Schoolcraft would record the stories.Longfellow, who apparently never visited Lake Superior, based The Song of Hiawatha largely on Schoolcraft’s writings. Longfellow got the story of Manabozho—the Ojibwe demigod and son of the West Wind—fairly straight. That is excepting the glaring but intentional error of renaming Manabozho, Hiawatha—a famous and very real character from Iroquois, not Ojibwe, history, whose name the poet simply preferred. Or at least we can assume Longfellow got it right, because in 1900, when Buhkwujjenene was 90 years old, he accepted an invitation to appear at the Boston Sportsmen Show—a marketing play, sponsored by the Canadian Railway, which was aimed at attracting wealthy gentlemen North. While he was there, the old sage hoped to visit Longfellow’s home. But Buhkwujjenene died the day he was to leave. And so it was left to his nephew to bring greetings to Alice Longfellow’s door. Alice recorded no details of that first meeting with Kabaoosa and Wabunosa. All we know is that shortly after their visit a piece of birch bark was delivered to Craigie House. Burned into it was an invitation to come and visit the following summer:

“Ladies: We loved your father. The memory of our people will never die as long as your father’s song lives, and that will live forever. Will you and your husbands and Miss Longfellow come and see us and stay in our royal wigwams on an island in Hiawatha’s playground, in the land of the Objibways? We want you to see us live over again the life of Hiawatha in his own country.”

Alice shared the invitation with her sisters, then displayed it on the secretary in her father’s office. Besides the addition of a portrait of Longfellow painted by his son, Ernest, it was the only change she ever made to the room after her father’s death.The following August Alice departed Boston, with her sisters and their families, for the land of Hiawatha.