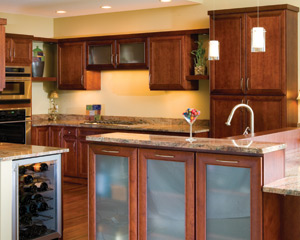 Avid runners and all-around outdoors lovers, April Stuck and they’re more apt to fire up the grill than the range. So when they went to remodel the dated kitchen in their home on Grand Traverse Bay, the couple wanted a no-nonsense kitchen that moves as fast as they do. But they also wanted it to be the hub of the home, if not for gourmet cooking, then for relaxing and entertaining.

After browsing decor magazines for ideas the couple realized that all the kitchens they were attracted to were modern—a style that is a departure from the traditional style in the rest of their home. The challenge they posed for their kitchen designer, Sandra Bargiel of Bay Cabinetry, was to integrate that modern look with the rest of the home. But first, Bargiel had to address flow and efficiency problems in the existing kitchen. A peninsula jutting across the kitchen interrupted a direct path to the living room and left little space for an eating area. Plus, Stuck and Mertz both have home businesses and wanted to be able to pull out their work in the kitchen.

Bargiel solved the efficiency and space problems with a generous 61⁄2-by-8-foot island situated at the open end of the three-sided cooking area—placement that leaves ample space for flow around it. The three-tiered island houses the kitchen sink, work and eating areas and storage for wine and bar glasses at the tallest end. That storage, combined with a wine refrigerator tucked under a counter just steps from the island, created a standup wine bar—am unexpected entertaining niche that delights these wine aficionados, both of whom work pouring wine at L. Mawby winery in Suttons Bay. “Two or three people are always standing around it with their elbows on the counter,” says Stuck.

To achieve the integration between a modern kitchen and traditional home, Bargiel selected cherry cabinetry for its warm, rich tones then paired it with a cherry floor for a seamless modern look. Natural-toned granite, floating open shelving lit by puck lighting and a magnificently minimalist track-chandelier contribute to an overall sleek, sophisticated ambiance. “Modern is about textures and shapes, not about a lot of bric-a-brac,” says Bargiel.Now that it is finished, Stuck and Mertz spend more time than ever in their kitchen. On her long list of favorites about the renovation, Stuck raves about her GE Advantium, a microwave installed above the cooktop that browns much like a traditional oven, allowing for quality cooking that performs at the speed of their lifestyle.

Purchase your ticket for the 2008 Ultimate Up North Kitchen Tour.