Discovery: The Bird in Santa's Beard 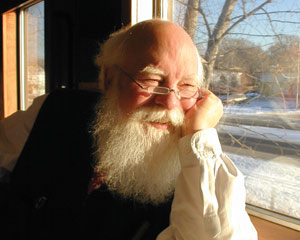 When you meet Jeffery Schatzer, you believe that he is Santa. His white beard is actually attached, his eyes are kind and soft, his mirthful laugh sounds just like that of his legendary persona, Santa Claus. So who better than Schatzer to answer one of the mysteries of Christmas: Why does Santa need other folks to dress up like him at the holidays? In Schatzer’s first book, The Bird in Santa’s Beard, a lonely bird builds a nest in the world’s most famous beard, causing Santa to take a hiatus from his duties and call on his helpers all over the world.

Schatzer, the Santa’s helper known in Northern Michigan for his motorcycle appearances in the National Cherry Festival’s Junior Royale parade and on the Traverse City Dinner Train, loves giving children plausible answers to implausible questions, because he feels so strongly that life hinges on the wonder of belief. “Belief is so precious and so overlooked,” Schatzer says. “Belief has the power for good and evil. We all need to step back for a moment and take a look at the impact of what we believe in or what we do.“Kids will ask me, ‘How do reindeer fly?’ and I ask them if they’ve ever seen a deer jump in the woods,” he says. He’ll explain that white-tailed deer can jump higher than the ceiling in your bedroom—and when there’s the power of nine reindeer at the head of his sleigh, they can appear to be leaping right over houses.

Schatzer wanted The Bird in Santa’s Beard to make the Santa character more real for children, so the book uses both photography and illustration to bring the new Christmas legend to life. Traverse City photographer Don Rutt shot the photos in the region. Schatzer, of course, is Santa.

Schatzer, an executive speechwriter at Dow who splits his time between Midland and his vacation home in Bellaire, takes his job as Santa’s helper very seriously. He holds a bachelor of Santa Claus degree from the Charles W. Howard Santa Claus School in Bay City. (Charles W. Howard, the school’s founder, was technical adviser for the Christmas classic “Miracle on 34th Street”; after Howard’s death in 1968, longtime student Nate Doan moved the school from Albany, New York, to Bay City.) There Schatzer and other earnest Santa scholars learn about St. Nicholas traditions, and receive instruction on wigs and beards, entrance making and sign language. All this to make the Santa character—helper or otherwise—someone a kid can believe in.