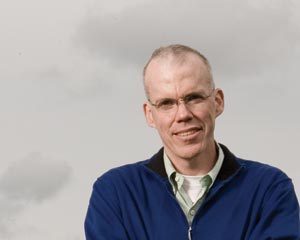 Remember This: 350.
Earlier this fall, global warming warrior Bill McKibben drew a crowd of 700 to a Traverse City rally for his 350 Campaign—named for the number that NASA scientist and global warming expert James Hansen believes is the safe threshold for parts per million of carbon dioxide in the Earth’s atmosphere. McKibben’s 1989 book The End of Nature helped launch the concept of climate change into the public consciousness. The rally was sponsored by the Michigan Land Use Institute (MLUI). We checked in with McKibben after the rally.

You take the fight against global warming to cities all over the country. How does Traverse City compare in terms of enthusiasm?

I saw as much support for doing something about global warming as any place I’ve seen in the country. The rally was amazing—the kind of enormous crowd you normally get on a college campus. MLUI played a large part in that. We’ve gotten used to thinking about Michigan as a part of the past—a museum of history and technology. Traverse City is very much part of the future.

What can our region do right now to make a difference?

Build more windmills. It no longer makes sense to hide behind aesthetic reasons—they are beautiful. The breeze made visible. We live with the much less beautiful tangle of electric lines along roads. If we don’t deal with this issue quickly all the other pretty things won’t be here. Maple trees don’t live where the temperature gets too hot, so kiss your beautiful Octobers goodbye.

You addressed the eight new coal plants proposed for Michigan at the rally.

Coal-fired power is the fastest growing source of carbon emissions in the world. The thought that Michigan would want to get locked into 40 or 50 years of burning the dirtiest stuff on earth with a price that is going to keep going up is the kind of mistake that economic forces in Michigan have made in the past. It’s yesterday’s technology, the Cadillac Escalade versus tomorrow’s Chevy Volt.

You’re a proponent of eating local to save the energy it takes to transport food long distances. Eat any memorable local foods while you were here?

I’m a new citizen of the Cherry Republic. That place was fantastic. The chicken salad sandwich with dried cherries. Cherry turnovers. It was also great to see a town with three local breweries. Hold up a Right Brain Brewery IPA [India Pale Ale] next to a Bud Light and you’ll see how much sweeter the world is when we are more localized.

You hiked up Pyramid Point in the Sleeping Bear Dunes National Lakeshore while you were here. Care to share your impressions?

The whole landscape was amazing, but the thing that lives in my memory was the dunes extending down into the forest on the inland side. I’ve run down dunes but never through deep sand and dark hardwood forest. It was a great treat.

The dark side of that fun?

As we raise the temperature those forests will die in place.