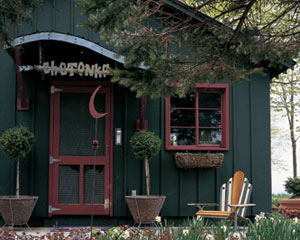 Patti and Michael Chetcuti had a case of remarkably clear vision the day they spotted a tiny, drab cinderblock structure perched on a Leelanau County bluff overlooking Lake Michigan. Not the conventional perspective that would have appreciated the panorama but missed the possibilities of the forlorn building. The young couple share funky, functional ideas about design, and they saw integrity in the old place. And old it is. Though no one is sure exactly when it was built, the structure dates back at least to the early part of the 1900’s. Some folks in the area say it was once a school for Native American children. 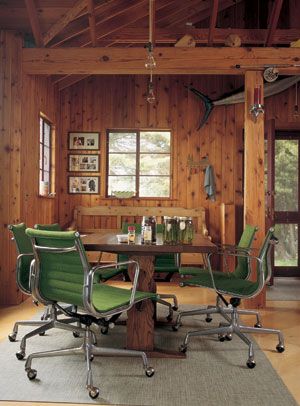 If the cabin had been for sale the Chetcutis would have bought it on the spot. But unfortunately it was located on the only section that wasn’t for sale within a large parcel a realtor had brought them to see. A year later, the Chetcutis had all but forgotten about the building when the realtor called with good news: The owners wanted to sell the cabin—specifically to the young couple who had seen its potential.

The charmed beginning became more fun when Michael and Patti found an architect, Suzannah Tobin, and a contractor, Drew Craven, who shared their love of unconventional design. Reality, of course, soon set in. The Chetcutis were hoping to winterize the new getaway—the linoleum floor was cold, the cement block walls were colder, and the old iron-frame windows let in enough air on a windy day to blow your hair. It could be winterized, Tobin and Craven told them, but little of the character that had attracted the couple in the first place could be saved in the process. The Chetcutis settled on making it a seasonal retreat.

Even then, there was plenty of work to do to make the place habitable. Craven overhauled the electrical and plumbing, removed, reglazed then reinstalled the windows, refit the brick chimney and reshingled the roof. Finally, he ripped off the sagging front porch and added a 6-by-20-foot addition to bring the cabin up to 850 square feet.

Tobin worked with the Chetcutis on the design details, mixing traditional materials and eclectic furnishings with the cabin’s functional structure—a style Patti calls cozy industrial. For the exterior of the new addition they chose a traditional cedar board and batten but kept the exposed cinderblock on the original walls. Craven painted the entire structure a shutter green, trimming it in brick red. 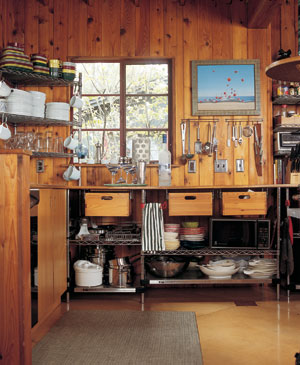 The interior walls of the new addition are paneled with a rustic knotty pine, while the old linoleum is covered with sleek, modern, Russian birch plywood. In the original section the Chetcutis left the tried-and-true cinderblock walls exposed. The original section is an opposite fusion of old and new. On the walls the tried and true cinderblocks are exposed, while the old linoleum floor is covered with sleek, modern Russian birch plywood (made up of thin veneers of solid birch). The original gas mantle lighting had to give way to electric, but the Chetcutis softened that change by installing single, low-watt bulbs hung from the ceiling from vintage fabric cords.

Finally, in a couple of swift design strokes, the architect and her clients made the tiny kitchen rock to a new rustic beat. Among their changes are a refurbished vintage 1927 stove surrounded by stainless steel countertops and Metro shelving stacked with dinnerware designed by renowned ceramist Eva Zeisel.

It all adds up to a kick-off-your-shoes-kick-in-your-design-sense kind of place—more style than the old building has ever seen, but a look that fits the