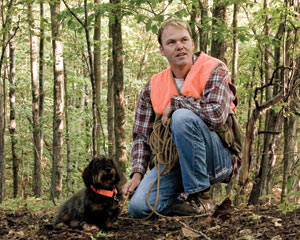 Every fall, Daryl Couturier and his wirehaired dachshund transform themselves into an amazing deer-tracking team to help hunters recover dozens of lost deer around Lake Leelanau and the Traverse City area.

What inspired you to get into tracking dogs and helping people find lost deer?

When I started bowhunting, I hit a couple and lost them. That really, really bothered me. As a hunter, I believe that the animals we pursue deserve the utmost respect. You need to do everything you can to find an animal after you pull the trigger or let an arrow go. Also, my wife says I think about deer 365 days a year. But with my job as an excavator, I’m very busy in the daylight hours in the fall. With the dog, I can go out on a call at night to help another hunter find his deer and get my deer-hunting fix.

Why are wirehaired dachshunds good at this work—why not a bloodhound or a Labrador retriever?

They tend to be a one-man dog and bond very well with the handlers. A dog has to have the desire to track and please the handler—attributes this breed definitely has.

Size is a big reason, too.

In Michigan, a tracking dog must be on a leash in the field. Deer can go though some pretty nasty stuff. I would much rather be pulled by a 20-pound dachshund than a 120-pound bloodhound. That’s why they say a bloodhound man’s lead arm is four inches longer than the other.

How many deer have you and Paige recovered?

In three full seasons, we have found twenty-three deer for hunters. She found her first deer at only 13 weeks old on what was supposed to be a training run. She was about a foot long then—just a pup.

What’s the excitement of blood trailing—why do it?

The dog may take some time to figure out the track and everybody goes back to thinking the deer is lost or simply was not hit that bad and will survive. Suddenly, the dog “lines out” and the race is on. I’ll see something glowing in the flashlight up ahead—an eye—and yell, “There it is!” It’s like pulling a rabbit out of a hat. The hunters go crazy. Paige just eats up the excitement.

What was your most memorable trailing mission?

Last year, the 2007 “youth deer season,” a boy had shot the biggest buck of his short hunting career, but they lost the trail. The kids had to go home because it was a school night. Paige tracked the deer to a lake and went right in after it. It was dark. But I told the others that the deer had to be in the lake because my dog does not like water. Finally, one of the guys with a flashlight saw the deer. I never heard such a happy group of people. I went right into the lake—had to swim out to the deer—to recover it. They could not believe that I would do that for someone else’s deer.

Ever say you can’t help somebody?

I don’t want to give the impression that losing a mortally wounded deer is something that happens all the time in hunting. There are thousands and thousands of hunters in this area, and it just so happens that Paige and I are one of the only tracking teams around. We get about 20 calls every season. But when you have a real job during the day, that’s a lot. Last year, I tracked 10 nights in a row.

What do you charge?

In years past I said it was a free service, but this year I’m going to have to ask for gas money. Over the years I have found most people willing to give me something without asking.