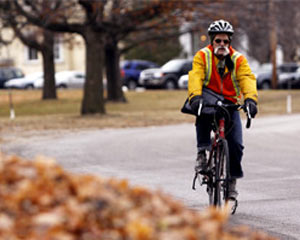 Throughout Traverse City, there’s a guy riding his bike.  In the rain, snow, freezing winds, there he is, wearing an orange reflective vest and a safety helmet, pedaling away through the elements.

“I ride because it’s relaxing,” Fred Braun says, squinting one eye as he sips his coffee outside of Cuppa Joe’s.  His 21-speed red Giant leans against the old brick building.

Fred doesn’t own a car, but 15 years ago he did.  Then it stopped working.  “I was slow to get it fixed, and wound up never getting around to it,” he says, smirking, “So I started riding.”  And he hasn’t stopped.

Living roughly five miles from his job at Munson Medical Center, his workday commute takes 30 minutes in the morning and 45 during the mostly uphill battle home.  Snow easily doubles the time. Yet, he’s never missed a day of work because of weather.  When people stop and ask if Fred needs a ride, he usually declines.  “I’m hyper when I get home after getting a ride.  I guess I’m used to burning that energy.”  And burn it he does.

The sloping ten-mile bike trek burns up over 800 calories a day.  “By the time my dad was my age, he had back problems,” the 165-pound fifty-four year old smiles through his gray beard, “I don’t.”

His transportation expenses total about $50 a year for maintenance. Fred has saved almost $6,000 on gas alone, just traveling to work or town and back. He plans on doubling that before he retires, but who knows where gas prices are headed? At a combined $1,300, Fred’s two bikes are attractive alternatives to the cost of a car.   Yet riding saves more than just money.  Fred prevents over 1.5 tons of CO2 emissions per year, which is the same amount of carbon savings that a vegetarian is responsible for annually.  Though an omnivore, Fred can enjoy his salami and roasted red pepper sandwich from Cuppa Joe’s guilt-free.

During Fred’s last vacation in 2003, he rode his bike to Ludington, took the ferry to Wisconsin and returned through the U.P.  Traveling along the water, stopping at every lighthouse as he passed, Fred took his time, appreciating the scenic route.  After all, you can’t go that quickly pedaling a Giant.  “It took me about a week,” he takes a bite of his sandwich; “I could have biked it faster,” Fred smiles and wipes his face, “but I was on vacation.”

If to vacation means to relax, then maybe Fred’s rides are all the vacation this northerner needs.