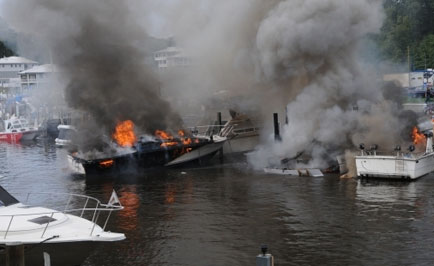 On Sunday, October 5, 2008 around 2 p.m. a 41-foot power boat exploded at the Oak Street Marina in South Haven, Michigan. The explosion illustrates the devastation boat fires can inflict not only to the boat itself but to nearby boats and those aboard.

I spoke with Captain Richard Lenardson of TowBoatU.S., a salvage and towing operation. Richard was nearby when the explosion rocked the marina. “I was around 30 boat docks away when I heard a thunderous explosion followed by a fireball and plume of black smoke,” said Richard. “I responded with my 23-foot tow boat. “When I arrived on scene the boat was engulfed in flames with black smoke boiling up from the inferno. The top cabin of the boat lay smoldering on a nearby grassy knoll. A secondary explosion sent debris through the hull of a boat in an adjacent slip.”

The fire had spread to boats in adjacent slips where fire consumed a boat’s mooring lines setting it free into the boat basin where it threatened nearby boats. Richard pushed the flaming boat back into its slip in reach of firefighters. At first, firefighters fought the blaze with water, with limited effect. A fire truck carrying foam soon arrived and joined the fight. “While pushing the burning boat back into the slip I could not see ahead with foam coating the windshield. Off to the side, I saw one of the victims climbing up a nearby dock ladder with the skin on his face peeled way,” said Richard.

The injured included two men, a woman, and child. All were recovered from the water by rescue personnel. Two of the adults were in critical condition. Fire Chief Ronald Wise of South Haven Area Emergency Services, suspects the boat owner and a friend were using a 28-gallon plastic gas container with an electric transfer pump to pump gas into the boat when the vessel exploded. Reportedly the electrical source for the pump was the boat’s batteries. That the cabin was blown off the boat along with the stern suggests that the source of the explosion occurred within the boat. The mishap remains under investigation.

Boat-Smart Tips When Fueling a Boat

Share stories and boat smart tips of your own on MyNorth community’s discussion forum, started by Tom Rau.

Tom Rau is a retired 27-year Coast Guard veteran, boating safety columnist, and author of Boat Smart Chronicles, Lake Michigan Devours Its Wounded. His book is a 20-year journal of recreational boating mishaps with valuable lessons learned. The book, along with recent rescue stories, can be viewed at: boatsmart.net