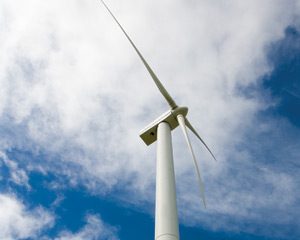 With about 100,000 commercial scale wind turbines spinning above Michigan’s Great Lakes, the state could generate 10 times its current peak output capacity of electricity, according to a study recently released by Michigan State University’s Land Policy Institute. But the report’s authors concede that issues related to water depth and other restrictions, like avoiding historical sites or important view-sheds make that large number unlikely.

“The important thing about this study is just to see that the potential in the Great Lakes is a really big number and that we can take care of all of our power needs with renewable energy,” says wind power developer Steve Smiley. “I recently told the people of Bay City that they could build 500 windmills in Saginaw Bay, and it would replace the amount of energy of a proposed coal-fired power plant.”

The study, titled Michigan’s Offshore Wind Potential, is released just as Michigan has passed into law a renewable energy portfolio standard that requires electric utilities to produce at least 10 percent of their power from renewable sources by 2015.

Check out Mr. Smiley’s Windmill Wars to learn about the trials and tribulations of Northern wind power entrepreneur Steve Smiley.

Thinking of putting a windmill on your land? Learn what to know about negotiating a lease.