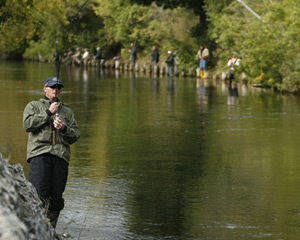 As a fisheries management biologist with the Department of Natural Resources office in Traverse City, it’s Todd Kalish’s responsibility to oversee operations at the Boardman River weir, where the salmon run ends. Fish guts? Rotting carcasses? Kalish deals with the icky stuff and gets a kick out of it all. He shares some fish weir wonders:

What exactly is the weir?

The Boardman River weir is primarily a trap and transfer facility. It’s actually called the James P. Price Trap and Transfer Harvest Facility. It’s where we block the salmon from continuing to run upstream where they would die after spawning. We receive runs of anywhere from 2,000 up to 12,000 Chinook salmon every year; if we did not do trap and transfer, you would have up to 12,000 dead, rotting, decaying fish in Traverse City.

Sounds like autumn is a busy time for you.

The salmon typically run from the third week in September through the last week of October. We like to process fish when we have right around 1,000 fish in the facility; we typically process about once a week. It really depends on the weather—the fish move into our facility a lot better during rain events, when the water temperature cools down.

What happens during “processing” in the facility?

Salmon have an insatiable need to swim upstream to reproduce—it’s the only thing on their minds. When the salmon are migrating up the Boardman, they run into our grates and they cannot go upstream. The only place they can go is into our raceways … We use a forklift-like thing to dip the fish in anesthetizing tanks, then we put them on a steel sorting table with three chutes: one chute is for Chinook salmon, one is for Coho salmon, the other is for any species that isn’t salmon. We send the fish down the chutes into totes filled with ice. Once we have a tote that’s full of Chinook salmon—a full tote is 1,000 pounds of ice and fish—we load it onto a truck and send them off to the American Canadian Fisheries processing plant.

They use every last bit of those fish. Eggs are sold as bait to fishermen. Meat from fish that are still good is sold to local shops. Anything that’s left over is ground up and turned into cat food.

So that’s where my cats’ salmon-flavored Meow Mix comes from?

These fish were going to die anyway. When you normally see salmon, they’re bright and shiny and have good color. The fish we work with are all black and brown—already decaying.

And you never get grossed out?

I really love it. One of the most rewarding parts is having school groups come; I’ll show the kids how everything works and sometimes do a fish dissection. At any given time you can see literally hundreds and hundreds of salmon in the river. The fish are floppin’ and jumpin’—the kids absolutely love it.

The James T. Price Trap and Transfer Facility is open to the public during the annual salmon run. For more information, contact the Traverse City DNR office at 231-922-5280.