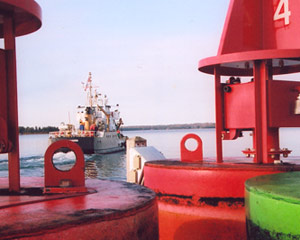 In the northern waters of the Les Cheneaux archipelago there are many ways to mark the measure of our days, but few more important than the setting in and taking out of the navigational buoys. For some of us this is a rite de passage.

The withdrawal of the buoys in October is the withdrawal of summer and the beginning of preparations for winter. The sun has a snap and the light a golden edge. The ice is coming and only the big Buoy No. 2 off Goose Island will remain.

The emplacement of the red and green buoys in May blazes the end of winter. Lilacs will be blooming on land, Sandhill cranes will be calling as they do a fly-past, and the boats will be in the channels and the big water of Lake Huron.

The responsibility for the care and tending and placement of the 270 buoys and 100 shore aids to navigation lies with the remarkable crew of the Coast Guard cutter, Buckthorn. They are in charge of the largest area of any cutter in the Great Lakes, the 9th Coast Guard District which includes the east, middle and west entrances of Lake Huron from Pt. Iroquois to Detour, from Big Shoal to Goose Island, all of Cedarville and Hessel, Pot Bay, Lake George to beyond Sugar Island, Beck Channel and the entire St. Mary’s River. They also maintain the lighthouses in this area, managing to get to and fro with an old LCM launching craft.

To emplace or remove the smaller channel buoys, a 21-foot outboard is used by a group of strong young men. The work is all done by hand – the buoys loaded or off-loaded without the aid of winches or cranes. Watching them haul these 150-pound buoys out of the water by hand, load them in the boat and then onto the Hessel pier is an impressive sight. They work as a seamless unit with proficiency, efficiency and skill.

To load and offload the large buoys that mark the approaches and channels in the entrances and lanes in the big water requires that same seamless effort, but on the foredeck with a hydraulic crane. These buoys weigh 350 pounds and are held in place by concrete sinkers that ensure no drift or wandering. A solar panel rides atop them to power the lights in weather.

Their emplacement or withdrawal demands meticulous positioning of the men, physical strength, delicate work by the winch operator and extraordinary focus on the task with an innate awareness of what is happening around you. It is a process at once balletic and brutal. For example, knocking out the block holding the buoy to release it overboard involves impeccable timing and care. Each man knows his job, and each man performs it quietly and with minimum movement.

Once the buoys from the Cedarville/Hessel area are gathered and aboard in the fall they are taken to the public marina property in Hessel and stored near the gazebo for the winter.

Watching the Buckthorn steam away I had time to reflect on her as a "great old boat," as her commanding officer, Rick Clark, refers to her, "reliable in weather and basically, always on a training mission." Her keel was laid in 1963, and she was commissioned in 1964. The crew refers to her, proudly, as "a blue collar boat." They take justifiable pride in "making a difference and making sure boats go safely."

Jason Willey is the chief petty officer. He drives the ship and is hands-on in training new personnel. His ability to knit the crew and direct operations is professionalism at its best.

David Martin, an E6, is 2 years into his 3 year tour. He’s a Cajun from Louisiana who today is making a wonderfully aromatic roux for the crew’s lunch between his care and feeding of the machinery and engines. He also has amazing tattoos, each of which represents a previous tour.

Together the crew gives a great sense of professional confidence and courage that carries over to life off the Buckthorn. They epitomize, to me, everything one would want in a Coast Guard, making sure that we are safe in, on and around the waters of northern Lake Huron.