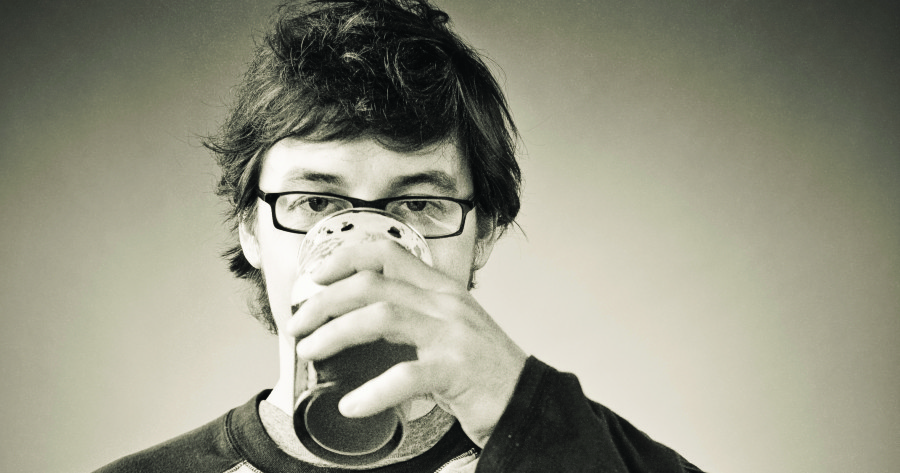 Photo(s) by Brian ConferJoe Short in the early days

Joe Short showed uncommon entrepreneurial tendencies at an early age: “One time in middle school I found this stash of candy left over from Halloween. It was December, and I realized that all the other kids would be out of their candy, and I could sell mine on the bus—I made a good haul.”

Joe Short showed himself to be an uncommonly hard worker at an early age: “My family was poor, and I knew that if I wanted anything, I had to earn the money myself, so everything I got—my own bikes, snowboards, lift tickets—I earned myself.”

Joe Short expressed an uncommon interest in beer (making beer, that is) at an early (though not inappropriately early) age: “When I was in college, people would come over to my apartment and they’d see me sitting there with all these books open in front of me and notes all over the place and they’d say, ‘Whoa, man, you got some kinda big test tomorrow?’ and I’d say, ‘No, man, I’m writing—a new beer recipe.’”

And so it was, and so it is, and so it will be, Joe Short is a brewer, a hardworking brewer, an entrepreneurial brewer, and he’s still a young brewer—he’ll turn 29 later this year. 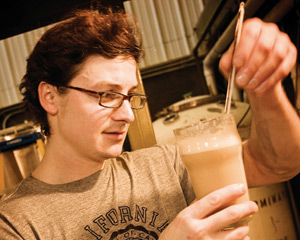 And on a Wednesday last January—a day like any other in his brewer life—Joe Short’s destiny is playing out at 121 N. Bridge Street in Bellaire, Michigan, home to Short’s Brewing Company, where he makes beer in the basement and serves it in the street level pub. At 10:30 in the morning, a weak winter light shines in through the big windows of the former hardware store, filling the pub with a pale, dreamy glow. The place is empty save for a woman prepping the cook station for lunch and another woman mopping the floor. Johnny Cash’s Folsom Prison Blues plays from somewhere in the back, specifically the basement, where Short has already been working for four hours.

At this particular moment Short is walking around the space—a neat assembly of 13 stainless steel tanks about 8 feet high and 4 feet in diameter set amid clean brick walls first raised in the late 1800’s. He wears knee-high rubber boots and sprays things with a hose. “The big secret of a brewer is that you are basically a cook that cleans,” he says, his boots squeaking on the wet floor.

Meanwhile, the dull hissing surge of a large gas burner provides a clue about the status of today’s brewing mission. The flame, which reflects blue on the wet floor beneath the mash kettle, is heating 350 gallons of water that will be used for the mash.

Today’s concoction is named Soft Parade, and with ingredients like red raspberries and black raspberries to be added at day’s end, the recipe embodies one of Joe Short’s central philosophies: push the flavor boundaries of beer. By adding unexpected ingredients—licorice, cocoa, black cherries, dill, horseradish and coriander, among many others—he creates rich and complex flavors not found anywhere else. Short’s now sells about 20 beers, ranging from Local Light to Chocolate Wheat—not a one of them “plain Jane,” he says. On top of that he makes 13 in what he calls the Imperial Beer Series. And the market has taken notice. Though Short opened his brewery in April 2004, he already sells tap beer in kegs to more than 70 pubs and restaurants statewide, and Short’s own pub has become one of Northern Michigan’s hottest gathering spots for locals and tourists—a popularity helped along by his commitment to presenting live music.

When the mash water has heated long enough, Short sets up a ladder next to the mash tank, removes his glasses and one of his two T-shirts and climbs up to the rim of the tank. “This is the ass kicker of the day, also known as the Joe Short physical fitness program,” he says. He shoulders a 50-pound bag marked Briess Malt Ingredients Co. Malted Barley, cuts open the top and pours it into the tank, and then another and another, until he has poured 550 pounds of malt and barley. The enzymes that will activate as a result are key elements in the alchemy that will create an enticing brew from the murky liquid now soaking what looks like a giant vat of oatmeal.

He then grabs what looks like a slender canoe paddle, shoves it into the mash and stirs the dense mix of wet grains. Steam rises from the tank and curls his hair, beads on his face. “Smell that rye?” he says. Sweat soon runs down his arms. The veins across his forearms and biceps swell with the effort.

Suddenly Short stops stirring and cocks his head. “What are we listening to now?” he asks his assistant brewer, Steve Ison, the first person to last more than a year working in the brew house with Short.

“Howling Wolf, all right,” Short says, and resumes pushing the mash around in the tank.

After a while, sweat stains the back of Short’s shirt. Then he says abruptly, “That’s it. We’re mashed in,” and climbs off the ladder. But five minutes later he’s on the ladder again, this time pushing a thermometer into the steaming mix.

Not that Joe Short recommends it, but beer-making eventually won out over college, and in his senior year he dropped out of Western Michigan University, where he’d been studying to be a shop teacher. Examples of his woodworking still decorate the pub: a giant toy box, red seats from a Cadillac mounted on wood frames, crates for the displays, the bar itself.

Out of college, and having grown up in Rapid City, Short gravitated back North, taking a job with Traverse Brewing in Williamsburg and working there six months. He moved back to Kalamazoo to pursue opening a microbrewery in St. Joe, but it didn’t pan out. Then he landed at Michigan Brewing Company, near Lansing. “I worked for Dan Rogers there. He had more scientific and technical information than anybody else I’d met in the industry,” Short says. Their mutual appreciation for good beer formed a bond. “The guys there would say, ‘Hey, Dan really likes you; but Dan doesn’t like anybody.’”

When a manager from Jackson Brewing Company (no longer in business), in Jackson, called Rogers to see if he knew of any promising young brewers, he recommended Short, then 21 years old. He spent three years in Jackson developing his brew technique. “I went from being a C- brewer to being a B+/A– brewer there.”

But still he had a desire to own his own place, and when a relative told him the hardware store in Bellaire was up for sale, he peered into the windows on Thanksgiving night, 2002 and knew he’d found his brewer’s home. “I thought it would take $30,000 and three months, but $250,000 and 18 months later we poured our first beer,” he says. That night, he and two good friends who helped build the brewery sat in the Cadillac seats and enjoyed the fruits of their labor.

Leah has, for now, freed him up to focus on brewing, but as this winter night rolls around, it’s clear that brewing itself is actually more than a full time job. About 7 p.m., with a light lake effect snow drifting in the night, Joe hefts a half-dozen 55-gallon drums of spent mash grains into the back of his pickup truck so he can take them to his grandparents’ neighbor’s compost pile. As he steers along the Antrim County back roads, the lights of the dash illuminate his face. Snow blows in the headlights. When he turns in the yard, five deer that had been eating the mash pile bound into the darkness. He empties the drums and heads back to work. He’s quiet. Perhaps thinking about when to add the fruit to the mix when he gets back to the brew house. Perhaps thinking about the benefit concert for breast cancer research that happens tonight in the pub. If things go well in the brew house, he’ll be home by midnight. But tomorrow he has to rise at 4 a.m. to finish some beer tap handles—the wood shop skills still come in handy—that some distributors are clamoring for downstate.

Back in the pub, the evening unfurls. By 10 p.m. Seth and Daisy May are on stage, the second act of a three-act night. Beer drinkers pack the venue, listening to the duo’s wispy ballads of love and loss. The talk of the crowd, the guitars, the vocals, it all drifts down the back hall and settles below into the basement, where Joe Short walks among the tanks in knee-high rubber boots. He sprays the floor. He wipes a smudge. He turns a knob. He checks a gauge. He peers into a tank. … 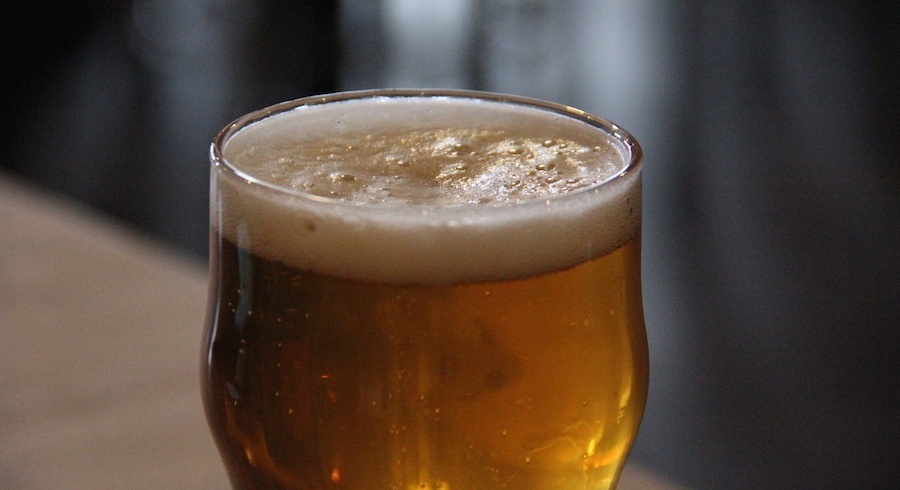 Turns out that Brian Confer, the photographer who shot this story, is himself a beer maker and a big fan of the microbrew ideal—independent people expressing themselves through flavors in handcrafted brews. We asked Confer for a quick take on the Short’s Brewing Company lineup.

“Well, you have to be impressed with the incredible range of beers on tap. Most microbrew companies—and Northern Michigan has several good ones—have maybe eight beers. But Short’s has 10 in the standard lineup, a whole bunch of seasonal beers and then there’s the Imperial Beer Series [Imperial beers have nearly twice the alcohol content of traditional beers]. That’s 13 more beers, so more than 30 beers total. That just blows my mind. And some of them have things like tomatoes in the recipe.

“It used to be that microbrewers were all about making the traditional styles—a pale ale, a lager, a porter, so on, and brewers would say, ‘Sure, we’d like to make more inventive beers but nobody would buy them.’ Now they’re still making the traditional styles, but more and more people are also saying, ‘What if we do this? What if we do that?’ Really pushing the boundaries, and Joe is right up there doing that.”

Confer’s favorite? “I don’t really have a favorite, and that’s what I like about Short’s. I can get whatever I’m in the mood for.”