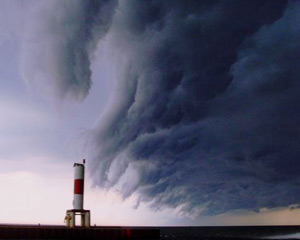 The potential for boating fatalities on the Great Lakes this time of year can be linked to what I call the “fall folly.”It brings to mind Bob Lind’s classic 1966 hit “Elusive Butterfly of Love.”

I could’ve never dreamt when I first heard this haunting melody as a young lad living in Los that so many years later it would bring to mind Great Lakes’ fall and spring boating.

Lind sang: “You might wake up some mornin’ to the sound of something moving past your window in the wind. Don’t be concerned, it will not harm you. It’s only me pursuing somethin’ I’m not sure of…the bright elusive butterfly of love.”

Oh, how tragically so many boaters have greeted the morning with the same bright elusive dream of a harmless day on the water, only to find the elusive butterfly of boating take their lives: I’ll take a broken heart any day.

What I find to be so elusive regarding fall is how summer-like and inviting it still can appear: that is, on the surface. But beware, beneath its waters flows a deadly element—cold water.

According to the latest Coast Guard Great Lakes statistics on recreational boating, forty percent of boating fatalities occur in fall and spring. Why? Cold water. I plead then with boaters to wear a life jacket to prevent the elusive butterfly of boating to wing them off into eternity.

I also plead with boaters: do not wait to the last minute to place your boats in winter storage, especially boaters who must travel afar to winter storage facilities. This reminder painfully brings to mind the three sailors who died in late October 2007 when 10-12 foot seas lifted their 35-foot sail boat onto a Calumet seawall, smashing it to pieces (more on this story at www. Boatsmart.net, 2007 columns, “Devours Its Wounded,”)

The crew had departed from downtown Chicago in the early evening heading out into heavy weather. By the time they reached Calumet Harbor several hours later, Coast Guard Station Calumet had just sent a heavy weather message to its command in Milwaukee requesting to stand down its 41-foot rescue boat due to heavy weather limitations. The rescue boat would be available only in the event of urgent search and rescue.

A valuable hard-earned lesson regarding the sailboat mishaps is not to wait until the precarious few, if any, remaining days of favorable Great Lakes weather area available.This now or never mindset to meet a last minute winter haul-out schedule can be a dicey affair, especially regarding Great Lakes weather in late October. The Great Lakes’ depths are littered with those who dared the odds.Should a boater venture out into heavy weather a pre-underway boat check, to make sure the boat is seaworthy can’t be stressed enough. Not doing so can lead to disaster.

On May 30, 2008, at 11:24 a.m, Coast Guard Sector Lake Michigan received an urgent Mayday from the captain of a 37-foot powerboat, reporting he was taking on water with seven people aboard. He passed his GPS position, which placed him two miles off Waukegan, Illinois. The coastal town, located on the western shore of Lake Michigan, is located approximately 42 miles north of downtown Chicago.

Within minutes, the boat sank, leaving seven people adrift in 47-degree water. All were wearing life jackets and later rescued by the Coast Guard. The captain told Coast Guard rescue swimmer Christopher Bemis that he believes the deck hatch for the forward anchor locker at the bow was not properly secured and that seas pouring over the bow found their way down the hatch and flowed through the hull. The bilge pumps could not keep up with the water intake. Once the boat lost its stability or “righting arm” it was doomed.

Properly securing deck hatches and making sure gaskets around hatches are water tight should be part of the pre-underway boat check. Once underway, and after filling a “float plan” with friends or loved ones, it’s highly advisable to occasionally check engine spaces for possible excessive water intake.

Should water intake raise concerns, immediately call the Coast Guard. This wonderful rescue recourse is there standing by to assist, so by all means call them. But better yet, prevent the need to call them in the first place by boating smart.

Tom Rau is a retired 27-year Coast Guard veteran, boating safety columnist, and author of Boat Smart Chronicles, Lake Michigan Devours Its Wounded. His book is a 20-year journal of recreational boating mishaps with valuable lessons learned. It, along with recent rescue stories, can be viewed at: boatsmart.net.