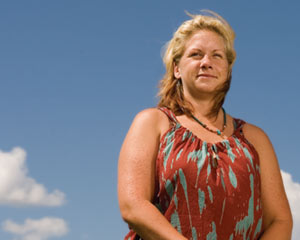 What is it about Northern Michigan that keeps you here?

I’ve spent a majority of my life in Northern Michigan—mostly Grayling. It’s where my aunt and my grandmother lived, there on Lake Margrethe. I have always just loved it. I love the water. I really don’t know what keeps me here right now. It’s just kind of like [where I’m] at peace, I guess.

And your feelings about your fellow soldiers?

It bothers me that I can’t get dirty, I can’t roll around in the dirt with them anymore. [Major] General Cutler [Adjutant General of the Michigan National Guard] and his wife, Chris, they’ve been like family. Two weeks ago my unit was here for two weeks training, and I was coming to the camp to speak with him. He had planned this whole day. He’s a two-star general—he called me the three star—and he took me around to all the places where my unit was and they were so excited. We got to spend some time together. It was great to shed some tears and some laughs.

I’m so proud of them. I’m just representing one of thousands of soldiers. This is just not about me. This is about everybody else. Some people might think that I’m selfish because I’m out there talking. I don’t care about that [crying]. I want people to know that we are human. Just know that. It’s unfortunate because they don’t know that we are human beings. There’s a reason why I’m here. There’s a reason why I had a second chance at life. I have to make the most of it. I will tell my story until I’m blue in the face if it will just give one person the perspective of what everyone is going through.