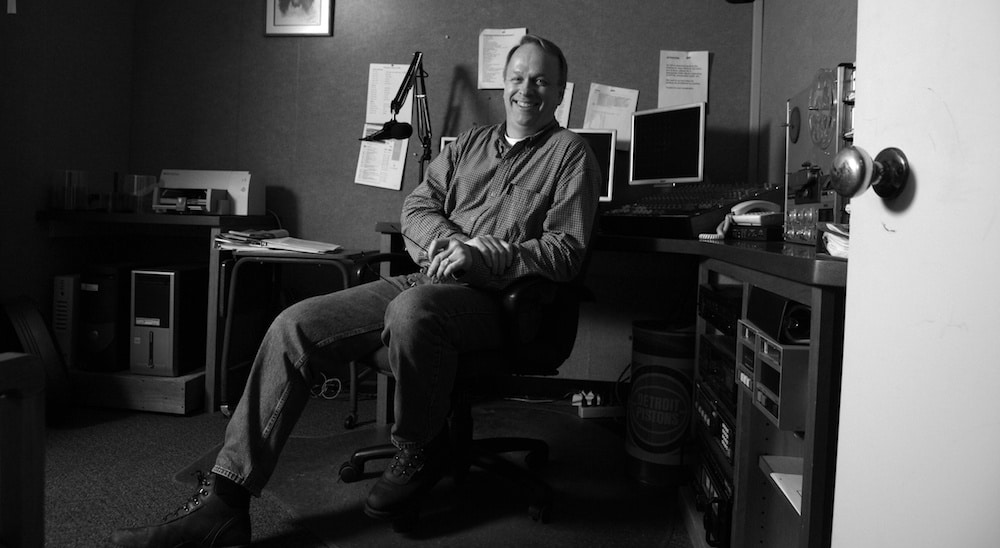 Twenty-one years ago, an April Fools’ trick by a Traverse City radio station launched an epic Michigan myth. Looking for a way to prank his station’s morning listeners, WTCM production director Steve Cook wrote and set to music a poem titled “The Legend,” about an imaginary creature he dreamed up and named dogman. It was just a joke, he says—until the sighting reports started coming in. We caught up with Cook to get the scoop on one of the North’s eeriest paranormal stories:

So it all started on April Fools’ Day.

We’ve always done April Fools’ pranks on the radio. That’s a tradition, radio-wide. This was unique, though, in that it wasn’t an orchestrated prank. It was just slipping something different and interesting on the radio.

How was the plan hatched?

We were short on ideas that year. It was getting late in the season, and the morning man [Jack O’Malley] said, “We really need something.” I’ve always been a collector of folklore stories; I’ve always loved Big Foot, Loch Ness … So I decided it was time to create a creature that was unique to Northern Michigan.

And you wrote a poem about it.

I laid the poem on top of a song. I put this thing together and Jack O’Malley listened to it—he wrinkled his brow and said it was more Halloweenish than April Fools’. But we played it on air anyways. At first there was no response … but then we started getting these calls from people saying, “My uncle has seen one of those things” or “I’ve seen one of those things.”

So, this fictitious character you conjured up became, in a way, real. What were you thinking when the calls came in?

At first I thought it was just kind of funny. I never really believed in all of these oddity creatures; I thought they were figments of people’s imagination. But now I don’t know. My quotable line is: Enough credible people have told me incredible stories. Maybe there is something going on out there and we just happened to hit the right note.

In sort of a philosophical sense, he is an amalgam of all the things that frighten you in the night. That’s what I created. But what people are telling me is that it is a real, upright, walking creature that has both human and wolflike characteristics. Not a werewolf per se, but an actual half-man, half-dog creature.

Where does the dogman live?

All over. There have been large numbers of sightings in Wisconsin. It happens all over Michigan, all over Indiana—oh, I just got a sighting report from Mississippi. People see them everywhere but because the song has been so popular here, we tend to think of Michigan as the center of the dogman universe.

Is the dogman violent?

He’s intimidating. He’s frightening. People are frightened because it’s something outside of their normal experience. But I’ve never known this creature to be violent.

April Fools’ Day is coming up. Do you think you’ll ever pull off a prank that tops the dogman legend?

In terms of popularity, I think this is going to be my legacy. It’s not the one I would’ve chosen, but I could’ve done a lot worse.

Cook sells copies of “The Legend” and donates all proceeds to local animal shelters. Over the years, “The Legend” has raised an estimated $50,000 for charity.