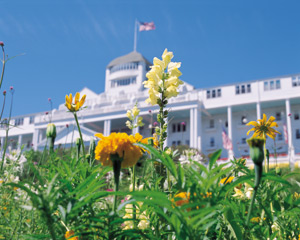 Dreaming of an unforgettable weekend at Mackinac Island’s storied Grand Hotel? October brings three options for you to step back in time:

Rewind to 1942—the world is at war, and there is a murder at Grand Hotel.  Mingle with famous entertainers from around the world and stay alert to piece together clues and solve the mystery when “Death Gets in the Act.” The special Murder Mystery Weekend is brought to life with a respected talent agency and performances by the USO big band on their first stop of their first major tour.

Fox trot, waltz and swing your way into Grand Hotel for this special weekend accompanied by the Sammy Kaye Orchestra and Alex Graham with the Grand Hotel Orchestra. Guests will have the opportunity to brush-up on their skills with dance instruction during the day, then two-step in two rooms each night.

Somewhere in Time Weekend, October 24 through 26

This Grand Hotel tradition on the final weekend of the season celebrates the romantic classic film Somewhere in Time, which was filmed at Grand Hotel in 1979 and starred Christopher Reeve, Jane Seymour and Christopher Plummer.  Members of the cast and crew of the movie participate in panel discussions, informative lectures and site tours of where scenes were filmed. Guests are encouraged to dress in early 20th century attire.

Bonus: All packages include accommodations, a full breakfast and five-course dinner daily, receptions on Friday and Saturday evenings, the famous Grand Luncheon Buffet on Saturday afternoon, half-off golf greens fees on The Jewel, and a discount on ferry boat tickets.  For reservations, call 800.33.GRAND or visit grandhotel.com.

Grand Hotel has been Michigan’s summer destination since it opened on July 10, 1887, well-known for its famous 660-foot front porch, the longest in the world. The four diamond hotel is designated a National Historic Landmark by the U.S. Department of Interior.

The continuity of its distinction is accentuated greatly by the fact that it has been owned and operated by the same family since 1933.  That is the year it was purchased by W. Stewart Woodfill, who began working at Grand Hotel as a desk clerk in 1919 and later managed the hotel in 1927.