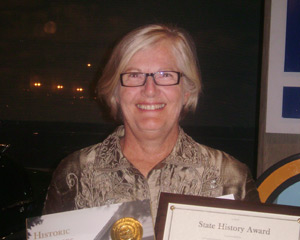 Barbara Siepker is a winner! The local author and owner of The Cottage Book Shop in Glen Arbor received a prestigious State History Award for her book, Historic Cottages of Glen Lake, a tribute to both the architecture and nostalgia for cottage life on the shores of Glen Lake.

The State History Awards are the highest recognition presented by the state’s official historical society and oldest cultural organization, the Historical Society of Michigan, established in 1828 by Lewis Cass and Henry Schoolcraft. Siepker received her award at the 134th Annual State History Conference in Grand Rapids this past weekend.

Published by Leelanau Press, the book showcases black and white exterior and interior photographs by Traverse City photographer Dietrich Floeter. Floeter used a wide view camera, which replicates the type and style of camera that would have been used during the time period of the early resort era. Siepker provides historical background on each cottage including cottage lore and family memories. More than 75 past and present owners were interviewed in the process of researching the 51 cottages included in this book. The cottages featured in the book are viewed against the backdrop of early summer resort life in northern Michigan the first half of the twentieth century

Historic Cottages of Glen Lake, which contains more than 300 photographs, illustrations and maps in its 224 pages, is priced at $50 and available at the Cottage Book Shop—231-334-4223, cottagebooks.com—and other local bookstores.