Getaway: Hemingway for the Weekend 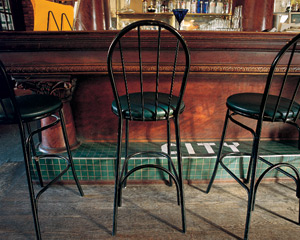 David Beier, owner of Walloon Lake Inn, doesn’t advertise that Hemingway slept here. He doesn’t have written proof. But he can make a pretty good case for it.

The Walloon Lake Inn—built in 1893 and called Fern Cottage in its early years—was the spot where summer resorters debarked the train and met the small steamboats that chugged them to their cottages. The late train into Walloon Lake carried folks who’d begun their journey in Oak Park, Illinois—as the Hemingways did. Rather than open their cottages in the dark, they sometimes took rooms at Fern Cottage. It’s not hard to suppose that Hemingway’s parents, with their young children in tow, did the same.

At the Walloon Lake Inn, then, you can sleep where Hemingway might have. With its quaint white clapboard siding, the inn looks much as it did in Hemingway’s time. The five upstairs bedrooms with their lake breezes have a simple, European feel. The food is like that, too. Beier, an acclaimed chef, fuses sophisticated flavors with rustic regional ingredients—very Hemingway-esque.

Hemingway’s sister, Sunny (Madelaine), was a regular in the dining room into the 1990’s. She helped christen the replica steamer that Beier uses to tour his guests around the lake on Sunday mornings from July until the weather changes at the end of September. Ask him, and he’ll putt past Windermere, the old Hemingway family cottage. Today it’s privately owned, but you don’t have to go inside Windermere to imagine the six Hemingway children splashing in the lake.

Horton Bay, on Lake Charlevoix, where Hemingway spent so much of his teen and young adult years, lies about 5 miles from Windemere, as the crow flies. Pack your Nick Adams Stories—Horton Bay is where many of them are set. Visit by car or bicycle, or row—as Hemingway did—to the end of Sumner Road, then hoof it to the village of Horton Bay. Longfield Farm, the family’s other Walloon Lake property, is adjacent to the Sumner Road public access—it’s private, so stroll by. Head on into Horton Bay’s Red Fox Inn, where Jim Hartwell, whose grandfather Vollie Fox fished and hunted with Hemingway, sells Hemingway books and memorabilia (Be forewarned: Store hours are unpredictable—catch as catch can.)

The Red Fox Inn appears in the Nick Adams story “Up in Michigan” (as the Fox house), as does the Horton Bay General Store next door, which is also thought to be the model for Mr. Packard’s store in “The Last Good Country.” In the book Ernie Hemingway’s Sister “Sunny” Remembers (1999 Ernest H. Mainland), Sunny writes of stopping there with him to “buy some sweet goodies to take home to Windermere.” The store still carries plenty of those, and nowadays steams up a fine latte—a good excuse to take a seat on the porch bench where Hemingway used to sit.

Hemingway’s story in this clapboard hamlet has many chapters. There were flirtations and romances with local and summer girls. He married Hadley Richardson here—the church is gone, but the Dilworth’s resort where he and Hadley celebrated their wedding breakfast is still here. Horton Creek, the site of fishing trips fact and fiction, runs sweet and clear just west of town, and Ten Mile Point, where the fictional Nick disses Marjorie, is a paddle away from the Lake Street public access. The potion of fiction come-to-life, spectacular scenery and aura of a young man’s coming of age is so powerful around here, don’t be surprised if you, too, are inspired to take up your pen—if only to send a postcard.

Hemingway did sleep at Petoskey’s Perry Hotel, in 1916 after he and a friend camped, fished and hiked their way up the coast from Onekama. He never stayed there again (so far as anyone knows), but he came often enough in the winter of 1919 and 1920 to drink, dine and relax on the veranda with its view of the Pennsylvania Depot. Not yet 21, Hemingway had already worked as a reporter on the Kansas City Star, served in Italy during World War I, and been engaged. After a summer in Horton Bay, Hemingway moved into Petoskey and took a room at Potter’s Rooming House on State Street. The stately Perry Hotel, wedged between Little Traverse Bay and the downtown, was a good place to find society.

It’s no coincidence that the Michigan Hemingway Society hosts its annual Hemingway Weekend at the Perry (October 24 through 26, 2008). The hotel’s gracious décor and amenities are in keeping with the hotel’s Victorian roots—and though it’s roughly twice the size it was in Hemingway’s day, he’d still recognize the grand old hotel. The veranda with its wicker furniture is as fine a place as ever to pass the time, and the dining room, though now with expansive views to the bay, serves up an oak planked whitefish that Hemingway would have appreciated. You have to think he would have liked the leek and morel omelet on the breakfast menu, as well, though he was long gone to another adventure in Toronto by the time those treats popped up in the Northern Michigan forest.

The third-floor library with its comfy furniture and gas fireplace is the spot to curl up with Hemingway. Among the must-reads for your Petoskey stay are the short stories “The Indians Moved Away,” and “The Killers” and also the novella The Torrents of Spring—Hemingway’s parody on Sherwood Anderson and the Chicago school of literature is set in Petoskey. If you don’t have the books already, McLean & Eakin Booksellers in the downtown gaslight district does. Or stop by the Petoskey Public Library, where Hemingway, clad in Italian cape and boots, regaled the local Ladies Aid Society with his war experiences.

When your bookwork is finished, hit the Petoskey streets—they’re awash in Hemingway’s ghost. Make your first stop The Little Traverse Historical Museum. The wonderful old building was once the Pere Marquette railroad depot of “The Indians Moved Away” fame. Take the time at the museum to watch a documentary narrated by Hemingway’s nephew Ernest Hemingway Mainland and to ask to watch the video of Irene Gordon reading a letter to her from Hemingway. Gordon, who lived past 100, was a friend of Hemingway’s when he was here. He was drawn to her beauty and her ability on the tennis courts. After Hemingway left Petoskey he wrote to Gordon a number of times over the years, and made it a point to stop by on her 50th birthday and give her a kiss. The year was 1949, and it was the only time he’d been back to Northern Michigan since he left after his wedding and honeymoon in September of 1921. After Gordon’s birthday he never returned here.

With your Hemingway stories in tow, cruise by the Harold Grand Building at 210 Howard Street. Back when it was the New Braun Hotel and Restaurant, Hemmingway took his meals here—and he made it the template for Browns’ Beanery Best By Test in The Torrents of Spring. Hemingway also ate at Jesperson’s Restaurant on Howard Street. Take a counter seat and imagine Nick Adams, towel stuck in his mouth, tied to the cook behind the restaurant doors—because legend has it that this is the set for “The Killers.”

The starlets of Hemingway’s Michigan years.

Prudence Bolton, a Native American girl who grew up near Windermere, appears in “Ten Indians” and “Fathers and Sons.” Speculation has it that Bolton may have been Hemingway’s first and greatest love—an idea his sister, Sunny, rebuffs in her memoir about him.

Hemingway fell in love with nurse Alice Kurowsky while convalescing in Italy during World War I. He was in Oak Park when he received her letter breaking their engagement, then retreated to Windermere for solace. Kurowksy was the model for Catherine Barkley in A Farewell to Arms.

Once, Hemingway came to local beauty Irene Gordon’s house in Petoskey for dinner bearing his “catch,”—wrapped in paper from the local fish market. Everyone—including Hemingway—had a good laugh.