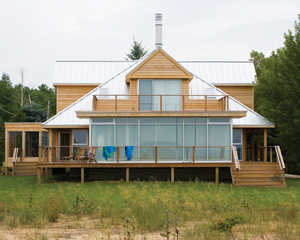 Simple, green and modern with an industrial edge. That’s how Jon and Frances Carlson envisioned their Up North cottage as they mused over its eventual renovation. For several years, Frances collected ideas and pictures, many clipped from Dwell magazine, a guide for the urban and savvy.

Yet with three little ones of their own, a pack of young nieces and nephews, and many friends who travel with kids in tow, real life had to be factored into the design. The Carlsons required a cottage that could stand up to sandy feet and wet bathing suits, not to mention energetic games on rainy afternoons.

Fortunately, this function and that form turned out to be perfectly suited to one another. Stripped to its studs, the old cottage was reborn as a modern rustic showpiece that doubles as a gymnasium. “We’ve had a soccer game in here,” Jon says, noting that plans for concrete floors were abandoned because little kids need the extra “bounce” of hardwood. “It’s basically indestructible.”

The metamorphosis is remarkable for a seasonal cottage built nearly 30 years ago. Jon’s family bought it when he was a kid, and by the time he was in college, it had become his responsibility. The cottage made a fine party place, but it got a little crusty during those years. “I never wanted to take off my shoes inside,” Frances remembers.

Yet there was never any question of selling the cottage and its 200 feet of shoreline on the east arm of Grand Traverse Bay. The view looks straight across at Jon’s parents’ home on Old Mission Peninsula, where Jon grew up. The water here is shallow and bathtub warm. Sunsets are spectacular.

Inexplicably, the original cottage had only a few small windows looking out toward the bay. Adding a view was a no-brainer. So was hiring the professionals—Royal Oak architect Brian Howard, who has worked with the Carlsons on other projects, and Traverse City general contractor Brad Warren (45th Parallel Construction), Jon’s buddy from high school and frequent visitor to the cottage since its guy-cave days. Because they live downstate, the Carlsons left the details up to Warren. “Quite frankly, without Brad, this never would have been possible,” Jon says.

Howard designed a bump-out living room with wraparound windows looking out at the bay. The three upstairs bedrooms have floor-to-ceiling windows, including sliders leading from the master bedroom to a generous deck. Instead of wall-mounted cabinets in the kitchen, there’s a window. Instead of mirrors above the sinks in the master bathroom, a wall of windows looks out at a pine grove.

All the windows are commercial grade, with aluminum framing and metal latches and handles that are functional and contribute to the industrial motif. Stainless steel posts further the look, while also supporting the open floor plan downstairs (more room for soccer). They match the shiny, stainless trunk-like flue on the freestanding tile fireplace and the steel frame of the dining room table. The open-tread floating staircase uses steel posts and galvanized cable instead of spindles. 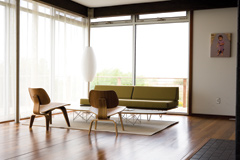 The top of their dining room table is a sheet of plywood they finished themselves, and its chairs were recycled from one of Jon’s restaurants. (He’s a partner in a restaurant development business with holdings that include Traverse City favorites The Blue Tractor and North Peak Brewing Co.) Savings like that allowed them to splurge on a few extras—some special pieces of mid-century modern furniture, radiant heat in the bathroom, a Murphy bed for the playroom.

While the Carlsons found creating a style intriguing, their main motivation for renovating the cottage was to provide a welcoming gathering place for as many friends and family members as can crowd around a campfire. “This is supposed to be a fun house,” Jon says. And as friends stop by and kids dash around, the cottage seems to be just that.

As great admirers of modern architecture, Jon and Frances Carlson worked hard to adhere to one of its guiding principles: keep it simple. They started by limiting the number of materials used. The charcoal-colored porcelain tile used on the fireplace is repeated in all the bathrooms. Ipe, the chocolate brown South American hardwood (sustainably harvested), is used for all of the interior flooring, trim and exterior decks. Manufactured quartz stone countertops are repeated in the kitchen and the bathrooms. Stainless steel is used throughout.

The Carlsons call their cottage modern rustic, but there are no deer antlers here. The rustic shows up in exterior elements—the metal roof reminiscent of a barn, the cedar siding that will weather to gray, and the way the house is set in the landscape. Inside, the look is spare but not cold, a clean simplicity that works to emphasize the outside environment. Surrounded by gorgeous views, Frances says, “We always feel warm.”