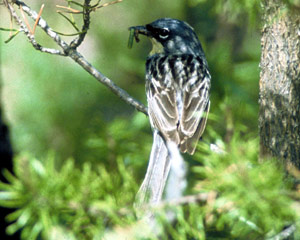 This story is about a bird, but it begins by asking you to first picture a squirrel. Perhaps you envision it sitting on a tree branch, tail unfurled along its back, fresh acorn poised in its paws. But if you live in an urban area, as 80 percent of us Americans do, you might have pictured the squirrel crawling into its home through a hole in your vinyl siding or popping up from a dumpster with a donut in its mouth. Likewise, perhaps you’ve seen a raccoon waddling down a midnight alley with a Cheerios box clenched in its teeth, witnessed a seagull eating a Quarter Pounder bun in a Home Depot parking lot. Even whitetail deer, icons of the wild, kick back in suburban gardens munching hostas like they were born to it.

Are you to blame if you think of wildlife as able to live pretty much anywhere? Aren’t environmentalists being extreme when they say animals need specific habitat to survive?

But unlike habitat generalists—the term for animals able to thrive in a wide range of habitats—most animals don’t do well living in dumpsters eating donuts. Quite the opposite: many animals need surprisingly specific habitat to survive. Biologists call these animals habitat specialists, and the Kirtland’s warbler provides a shining example. The half-ounce bird that makes a 3,000-mile round trip to the Bahamas each year has traditionally nested in just a half-dozen counties of Northern Michigan and only amid a certain tree, at a certain stage of its life.

Habitat specialization, however, is not necessarily a good thing for the survival of a species, as the Kirtland’s spot on the Endangered Species list attests. It is one of the few warblers listed and qualifies as one of the rarest birds on the planet. At some point along its evolutionary track, the bird hitched its nesting fortunes to the ecology of the jack pine forest—and none other. Ask a Kirtland’s to nest in those millions of acres of deciduous forest that blanket the North? You might as well ask a fish to go live in a desert.