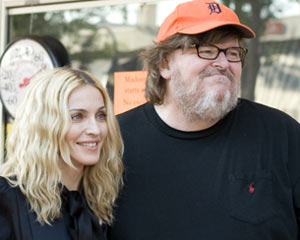 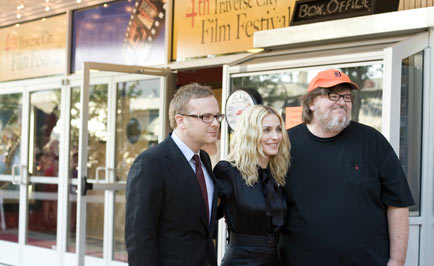 I Am Because We Are writer, narrator and executive producer Madonna (C) stands with Michael Moore (R) and director Nathan Rissman (L) at The State Theater for a screening of the new film at the Traverse City Film Festival August 2, 2008 in Traverse City, Michigan.

On August 2nd, 2008 Madonna took time out of her busy rehearsal schedule to make an appearance at the Michigan premiere of her documentary I Am Because We Are, at the Traverse City Film Festival and to visit Suttons Bay, Michigan, where her father resides.

Since he started planting on the hills of Suttons bay in 1996, vintner and former physicist Silvio T. Ciccone hasn’t made a big deal about his relation to pop icon Madonna (he’s her papa), he just worked hard growing his fruit and hand-bottling some fantastic estate wines.

His famous daughter, who turns 50 on August 16, has even poured wine in the tasting room wearing a baseball cap without his guests knowing. But 2005 was a good year for the Ciccones—an exceptional harvest, Tony’s 75th birthday, the release of Confessions on a Dance Floor, Madonna’s now Grammy Award-winning tenth studio album. What better time to make good on a plan Silvio and his daughter had been talking about for a few years: releasing wines with a Madonna label. Naturally, he reserved some fine grapes for his Madonna wines, which include a Chardonnay, Gewürztraminer, Pinot Grigio Ambrato, Pinot Noir and Cabernet Franc.

He call them the M labels, as “M” is what Ciccone and his wife Joan call his daughter. These wines are an homage, not about making money—his is a boutique winery producing only about 2,500 cases each year. Ciccone gave Madonna the first case of each of the wines for her collection; her favorite is the Cab Franc. Tasting room coordinator Jaclyn Eikey says that young women especially have been gravitating toward the wine, purchasing it expressly for special occasions like wedding showers. For girls that grew up singing “True Blue” into the mirror with a hairbrush microphone, the chance to sip a creation of the man who gave Madonna life makes them all feel like lucky stars.

The limited edition Madonna wines with labels designed from her Confessions on a Dance Floor album are now down to 3 varieties, $24.50 a bottle: 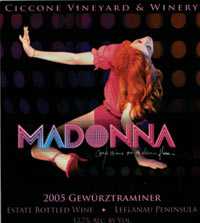 Pairs well with gourmet cheeses, pasta with alfredo sauce or seafood in a rich cream sauce.