Inside Info: The Future of Michigan Filmmaking 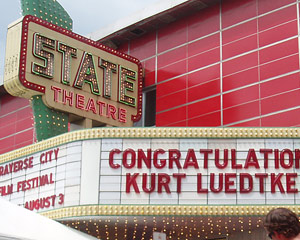 The line outside the City Opera House trailed along Front Street, disappeared around the corner, and stretched half a block down Union Street in the early morning sun. It was only ten past nine in the morning—the event wouldn’t start for another 40 minutes at least—but already a formidable crowd had gathered for the first of the festival’s filmmaker panels.

It was, after all, a provocative topic. The title of the panel, “Front and Vine: Showing Movies at the State, Making Movies in Michigan,” told the story. With the rising profile of the Traverse City Film Festival and Michigan’s newly instated refundable tax credit (offering a 40 percent tax credit to productions shooting in-state), what does the crossroad look like when Hollywood meets Michigan?

The panel (heartbreakingly minus the announced presence of indie-movie goddess and my personal screen crush Gretchen Mol) took the stage and addressed the success of State Theatre. Michael Moore, who was instrumental in rejuvenating the theatre and launching its current success, cheerfully related to the audience that despite its unconventional (by Hollywood’s standards) location, the State’s box office returns are consistently among the highest in the nation for the limited releases it’s permitted to show. By way of for instance, Moore cited that their screenings of “Lars and the Real Girl” drew the most money of any theatre in the U.S., beating out more traditional theatres in New York and Los Angeles.

Moore’s cheerful tone dissipated, though, as the conversation switched from the State’s successes to what he saw as the current state of multiplex-minded theatre chains and even the studios themselves:

“The top people are only interested in getting people in, getting people out and selling them overpriced popcorn,” he said, getting increasingly animated as he spoke. Rather than designed by corporate suits, Moore said, “I thought that filmmakers themselves should design theaters.”

Gales of applause from the audience.

The topic then shifted to theaters, such as the State, that offer more independent and “art house” fare. Speakers pointed out that our state has a disappointing lack of theaters showing unconventional or independent films outside of metro Detroit, Lansing, and Ann Arbor. When asked why the State succeeds, Russ Collins, owner and operator of the Michigan Theatre in Ann Arbor, laid the success square at the feet of the people themselves.

“The State succeeds because it is a community-based, mission-based theatre,” he said, comparing the local interest in the State to other cities supporting their local symphony orchestras.

The conversation then shifted to something that affects the future of Michigan: the tax incentive for filmmakers. Here, Janet Lockwood, head of the Michigan Film Office, was the star of the show, stating that over 80 films had been submitted to the Film Office, including upcoming projects from Tinsletown luminaries like Drew Barrymore and Clint Eastwood.  The projects, once finalized and headed to Michigan, could end up generating more than $300 million in revenue for the state, Lockwood said. Of course, she added quickly, we’d only see a little over half of that ourselves, with the tax incentive.

(For more about the tax incentive, and how it will affect the future of Michigan, please see our video interview with Janet Lockwood on MyNorth.com.)

As that reminder sunk in, Moore wondered aloud why we, as a depressed state, should be paying people who ostensibly have millions, to film here. Lockwood and others stressed the fact that new productions in state would create new jobs and even plant the seeds for a cottage film industry here in Michigan.

And, as pointed out by panelist and Michigan filmmaker Rich Brauer, that would help young people interested in film get a foothold in the industry.

(For more on Brauer’s take on Michigan and independent film, please see our video interview with him at MyNorth.com).

Following the panel, I had the rest of the day to check out a couple of the films being screened. First up was “Yonkers Joe,” a drama about a career gambler who figured a way to cheat the dice in Vegas, but before he can, he is forced to deal with his estranged and mentally handicapped son, Joe Jr. (Tom Guiry) who was recently ejected from the special school where Joe sent him. Starring the sadly underrated and woefully underutilized character actor Chazz Palminteri (“A Bronx Tale,” “The Usual Suspects”), “Joe” is an odd hybrid of heist picture and family drama. But even though the tonal shifts can be a bit jarring, the film is memorable, thanks to the overall care and passion writer/director Robert Celestino poured into the project.

The final movie I saw has easily become my Film to Beat for the festival: Gonzo: The Life and Work of Hunter S. Thompson. Taking some visual and stylistic cues from stylish documentaries such as The Kid Stays in the Picture, Gonzo lives up to its inspiration: The film is wild, it’s loud, it’s angry, and it’s full of life. Documenting the rise, fall, and posthumous rise again of one of the century’s most distinctive and vital voices, “Gonzo” is a must see.