What is sand made of? 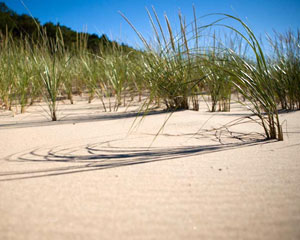 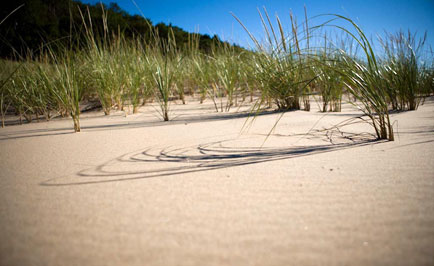 Bits and pieces of the natural world around that beach. In the Florida Keys, it’s crushed coral. In the Okinawan islands, there are beaches made entirely of the star-shaped exoskeletons of local sea creatures. In Northern Michigan, the answer is mostly quartz, or SiO2, one of the most common minerals in existence. The quartz sand granules were once part of pieces of granite, an igneous rock made of varying amounts of mica, feldspar and quartz. Mica and feldspar are relatively soft, and they are ground finely into clay by the erosive action of wind and water. Quartz is much stronger—75 percent as dense as a diamond—so it can withstand weathering better than the other minerals and remains coarse, as sand.

But while quartz is the main ingredient, there’s more to the mix. Feldspar, before it breaks down fully, is seen as pink or gray flecks in sand. Sometimes near the water line, you can find lines of black sand—magnetite, a kind of iron. A handful of this sand is magnetically charged and is much heavier than our normal beach sand. Occasionally, sand Up North contains flecks of copper, gold, silver and pyrite (fool’s gold).