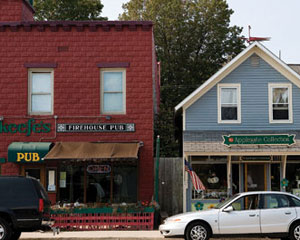 In Suttons Bay the old-timey Bay Theatre shows first-run flicks, Bahle’s Department store, built about 1876, sells DNA and Patagonia sportswear, and the summertime Jazzfest bebops down on the shore where Harry Sutton, one of the town’s first non-Native American settlers, once sold wood to passing steamers. This village perched on its namesake bay, (which is a lobe off West Grand Traverse Bay) has fine-tuned the relationship between its pioneer past and its sophisticated present. Want more proof? Head into Samuel’s—a chic bistro on the town’s main thoroughfare, St. Joseph’s Street—and order up a plate of good ol’ Up North whitefish dressed in worldly ingredients like sesame, citrus and ginger.