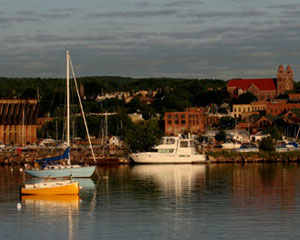 A little bit country, a little bit rock ’n’ roll, the city of Marquette is a melting pot of irresistible Upper Peninsula panache. The rugged city was built on the back of iron ore, and the towering spine of its port, which stretches over the city’s craggy Lake Superior shore, rumbles and thunders its cargo into ocean-bound freighters still today. But it’s the buzz of forward momentum on its hilly downtown streets and awe-inspiring natural backyard that bring the city boatloads of love from us here at MyNorth.com.

In Marquette, you’ll find vibrant art galleries in dolled-up train cars; a downtown streetscape of century-old storefronts; organic eateries and markets; the bustling university campus of Northern Michigan University—home to Olympic athlete training facilities and the Superior Dome, the largest manmade wooden dome in the world (putting Japan and its one-square-foot-smaller dome to shame); a kids museum where sliding through a septic system is not only allowed but encouraged; a library as grand as the nation’s White House, plus off-shore islands galore and some of the best hiking, biking and backpacking trails around.

A coincidence that this city on the Superior shore was named one of “America’s Most  Liveable Communities” and handed an “All-American City” award? We think not.