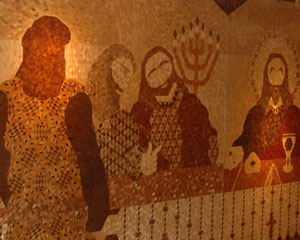 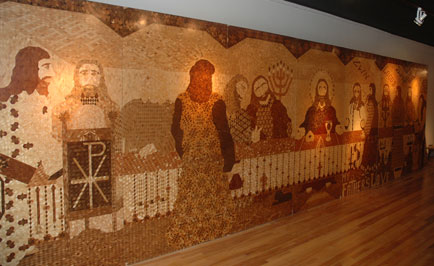 The Marquetry of Ed Lantzer: My Father’s Love, on exhibit now in Petoskey.

A vacant gallery at 438 E. Mitchell Street in Petoskey is the site of world premiere exhibition of The Marquetry of Ed Lantzer: My Father’s Love.

Lantzer’s wood mosaics, depicting significant moments in the life of Christ, will be on display for public viewing from noon to 7:00 p.m. through July 15th.

The mosaics were created with the Flemish technique of marquetry—an art form in which small pieces of wood are overlaid onto another wood surface to form a picture—which goes back eight generations in Ed Lantzer’s family. "I learned from my father who made game tables, decorative furniture and boxes," says Lantzer, now 76 years old and living in Kalkaska.

"My father cut each triangular piece of wood at 90 degree and 45 degree angles, making appropriate shapes for decorating boxes and chess boards. When I turned 15 he told me I couldn’t work with him any more, that I had to find my own angle. So I chose to cut all my pieces at 30 and 60 degree angles, making each piece a diamond shape.  That shape has offered real challenges and real opportunities,” says Lantzer.

He began the panels 25 years ago, but believes he was called to make them long before he was born.

Lantzer says at was seven years old he says he was a phenomenal kid “as far as reading and writing and so on; it was supposed to be some form of genius." Then, “I had an accident and since then I haven’t been able to write. I can understand symbols and numbers. I can read. But I can’t write. I still can’t. Half of my brain is dead.” But he’s honed the portion still working to achieve astounding results: Lantzer assembled these giant, elaborate religious scenes entirely in his brain. No sketches. No second tries. And entirely with wooden diamonds only a centimeter or so in length. He calls his work, a piece stretching 132 feet in all, My Father’s Love.

Many of the 3,500 people who have seen the mosaics since the opening on June 14, have been moved and awe-struck by Lantzer’s mastery of his craft and the mosaics’ ornate mystery and luminous iconography.

The stark angles in the mosaic are unforgiving, but somehow with them he creates the illusion of curves and figures where there are no curves. Some of the figures in the work morph and symbols flip when you walk past them—following you like the Mona Lisa’s eyes.

The panels came to Petoskey in conjunction with C.S. Lewis Week at Bay View.

“When I first saw the work stacked in a garage in Elk Rapids, I was simply blown away,” says Hull, a C. S. Lewis Festival board member. “People of the faith community will be awe struck by the spiritual power of the compositions,” he says. “Those of us from the arts community will be struck by the artistry and craftsmanship alone. Mathematicians will find even more subtle reasons for appreciating Ed’s work.  It’s breathtaking on several levels.”

The panels have been stacked in an Elk Rapids garage owned by Paul and Patti Hresko of Elk Rapids who discovered and befriended Ed Lantzer almost six years ago. The Hreskos helped Lantzer overcome some serious health problems, and then rescued his life’s work by protecting the panels for the past several years, including during the period they were stored inside Kalkaska’s old Craft House warehouse, a now-defunct factory that made paint-by-number kits. “It was Paul Hresko who told me about the panels during a discussion we were having about the C. S. Lewis Festival,” says Hull.

You can see the panels in Petoskey through July 15. The future location of the panels is under discussion. “It is our hope they will eventually travel throughout the world inspiring people artistically and spiritually” says Hresko. When the panels are not traveling, it is possible they may be placed at the proposed Elk Rapids Community and Cultural Center (ERC3) in Elk Rapids Michigan. For more information about the Panels or the Elk Rapids Community and Cultural Center, please contact Paul Hresko at 231-264-6858.