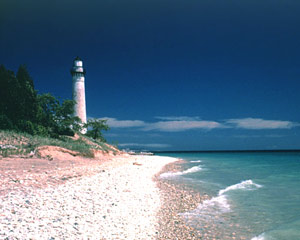 For over a hundred years, boats navigating the treacherous Manitou Passage, which stretches between the Manitou Islands and the mainland, depended on the light beamed from the lantern room of the graceful South Manitou Island Lighthouse. The light was extinguished 50 years ago. But this weekend it is shining once again.  To see it, after dark head to your favorite South Manitou Island vantage point along the Leelanau Peninsula mainland. (Hint: Sleeping Bear Point near Glen Haven in the Sleeping Bear Dunes National Lakeshore is front row seating.) Next week the light will be extinguished for the winter—but don’t worry, it will glow again next spring and summer.

Thanks to a partnership with Manitou Islands Memorial Society, Manitou Island Transit, and Electro-Optics Technology, Incorporated, the National Park Service at Sleeping Bear Dunes National Lakeshore was able to install a replica third-order Fresnel lens in the completely refurbished lantern room of the lighthouse.  A formal dedication ceremony is planned for next spring. Lighting the South Manitou Island Lighthouse is a National Park Service Centennial Initiative project.  The Centennial Initiative is a 10-year program to reinvigorate America’s national parks and prepare them for a second century.  The initiative includes up to $100 million a year in federal funds for these projects, but requires matching funds from philanthropic donations to the National Park Service.

The replica third-order Fresnel lens was fabricated by Artworks Florida, and the lens is illuminated by a lighting source with a low-wattage bulb designed by Electro-Optics Technology of Traverse City.  A crew of National Park Service maintenance personnel restored the lantern room and spiral stairway of the tower earlier this year, and only recently installed the lens and light.  The total dollar cost is $93,000 split equally between the National Park Service and private donations from the partners along with donated time and materials furnished by Electro-Optics Technology.

Love the light? The Manitou Island Memorial Society still needs to raise $13,000 in donations to fulfill their obligations under the agreement To help out go to leelanau.com/lighthouse.