This Crystal Lake Cottage is Pint-Sized and Perfect 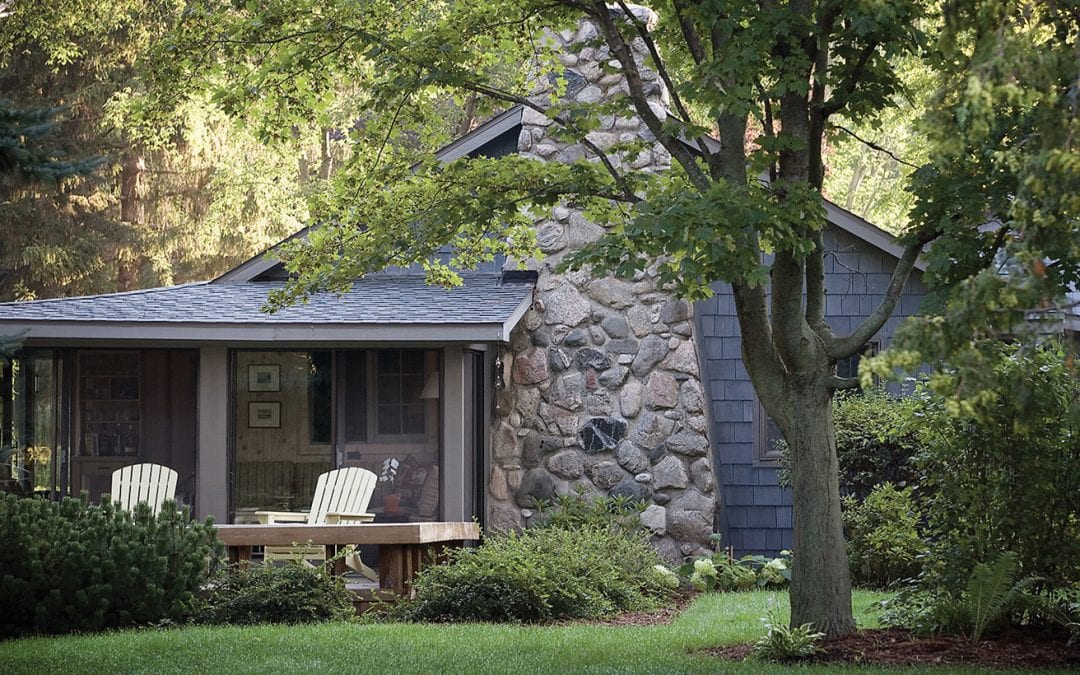 A retired New York executive fits his Crystal Lake life into a small antique cabin (with style) in the age of the McMansion.

Featured in the July 2008 issue of Northern Home & Cottage. Read the latest issue.

When an old cottage on a popular lake goes up for sale, its neighbors fear the worst: a tear down, followed by an oversized McMansion squeezed onto a narrow lot.

But when this pint-sized cottage on Crystal Lake changed hands, its new owner never even considered such a crime against Up North’s architectural heritage. Sure, the cottage was small by today’s standards—a one-room living/dining/kitchen area, three shoebox-sized bedrooms, one bath—but its charm was jumbo-sized. 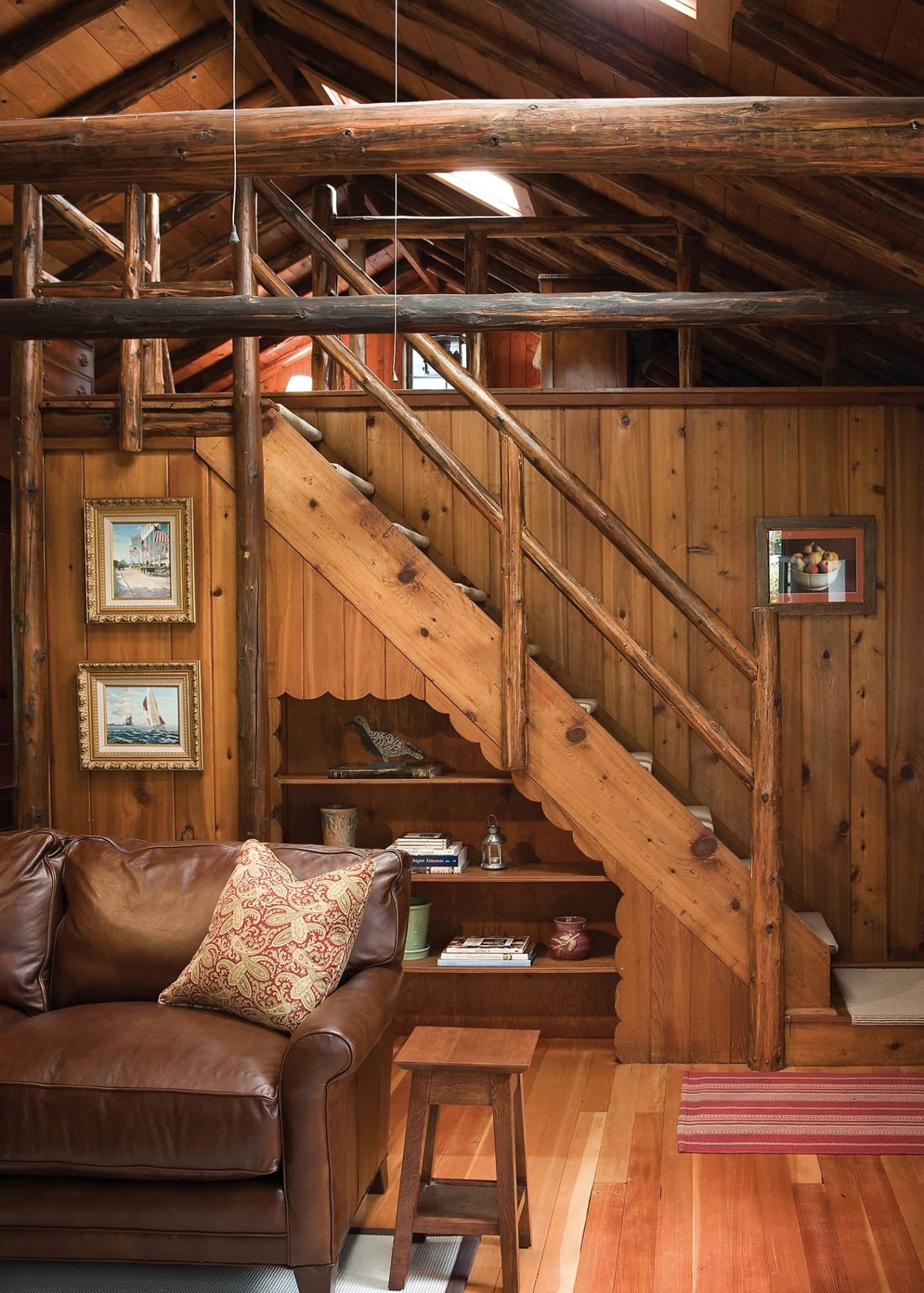 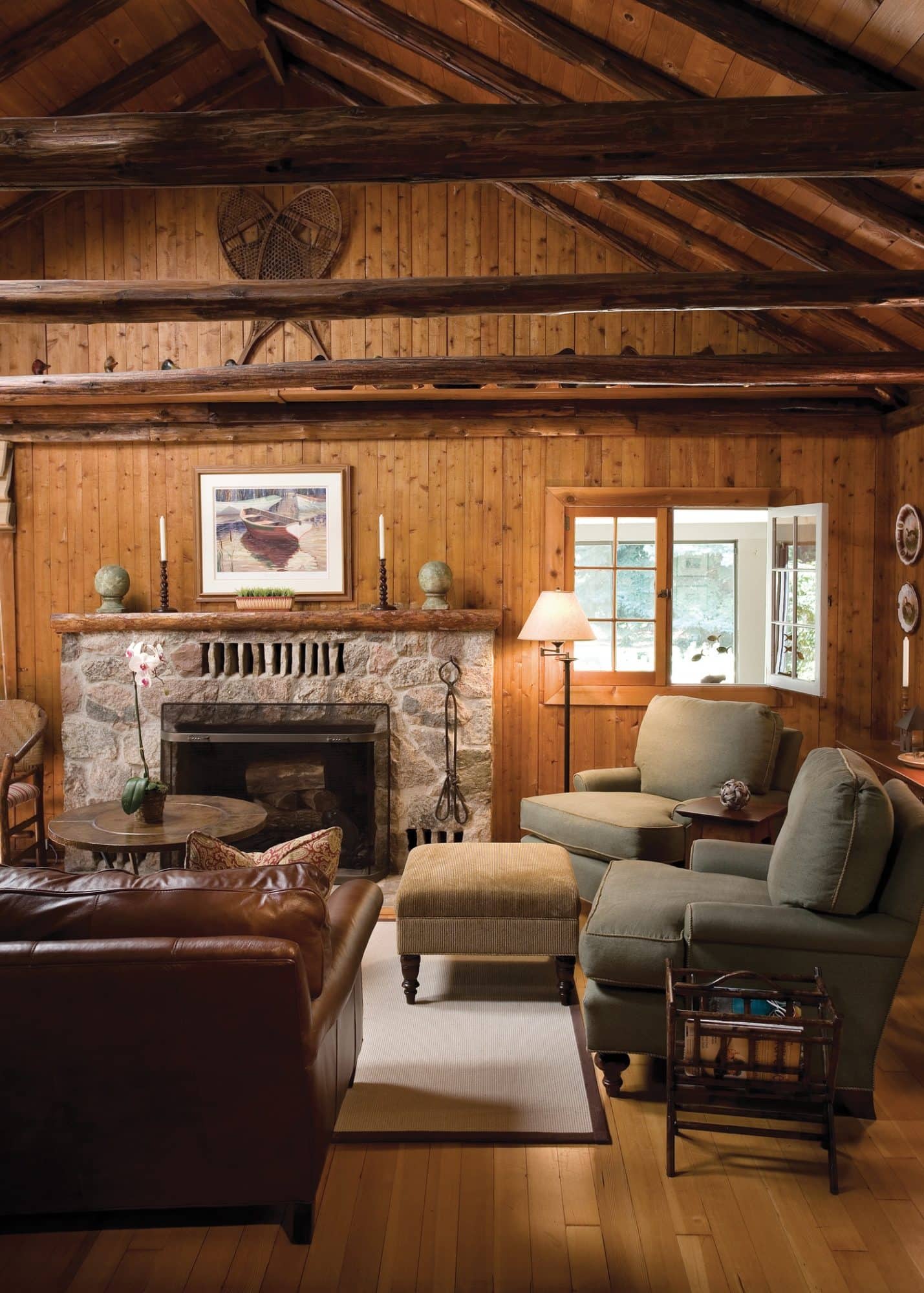 Built perhaps 100 years ago, the cottage has timber beams, a noggin-grazing open loft, pine paneling aged to a rich amber, and a cut-stone fireplace that was supposedly rebuilt rock by rock when the house was moved from the other side of the lake decades ago. One of the original windows is still intact, complete with multiple panes of wavy glass.

The new owner was delighted that so many historic features had been preserved. And he appreciated the improvements made by previous owners: a wraparound sunroom, an expansive party deck, skylights, cedar-shake siding, granite countertops. A cottage this well tended was definitely a keeper, he decided, even if the kitchen could fit inside an average closet, and the dining area could hold no more than four guests. “If we have more than that, we use trays,” says the owner, insisting that there’s plenty of room in the living area. “It’s summer. It’s relaxed. People like it that way.”

Still, after his initial summer at the cottage, he was feeling a little cramped. He wanted just a bit more room—a laundry, another bathroom and a bedroom big enough to turn around in. But how could he add on without destroying the character of the original cottage? 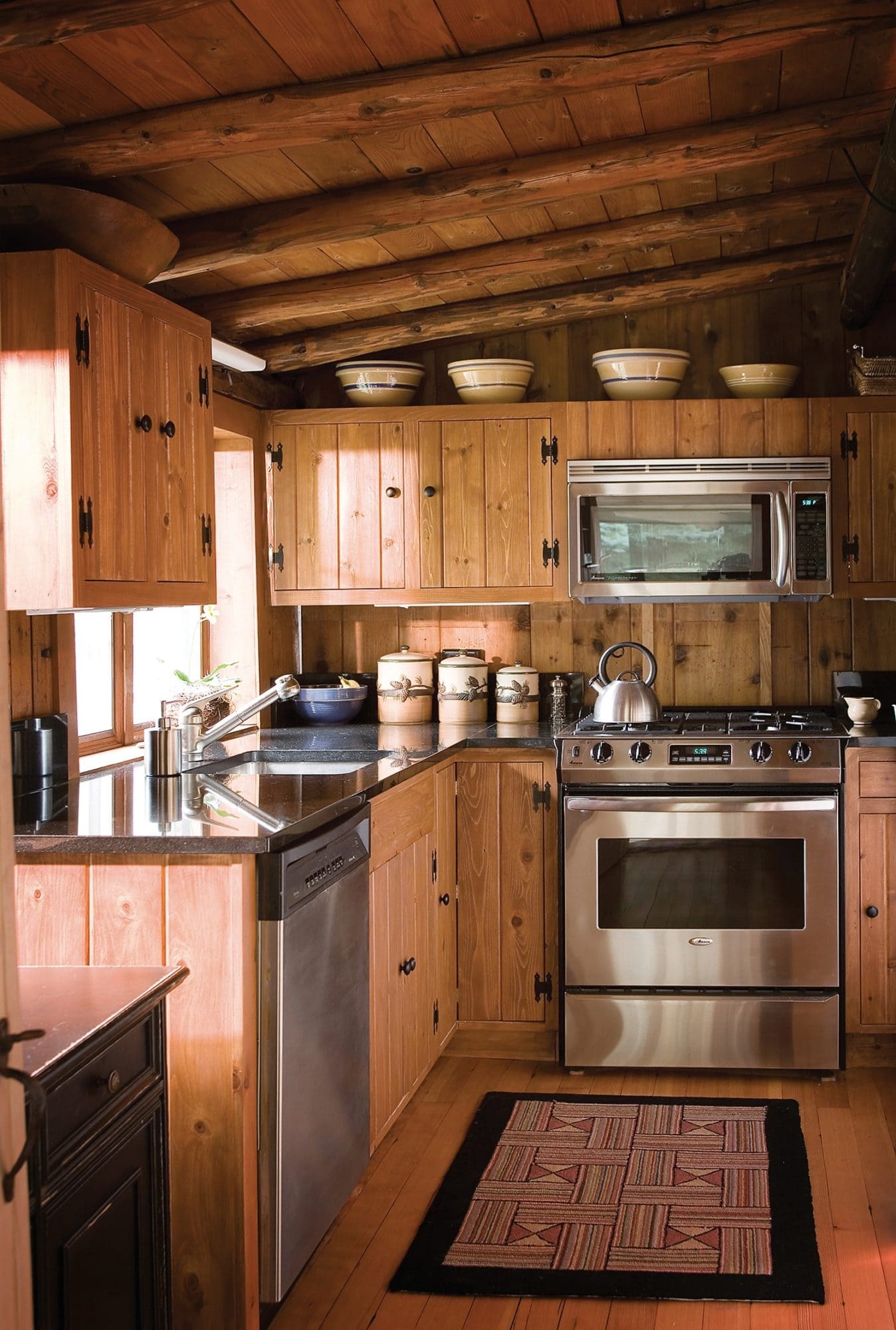 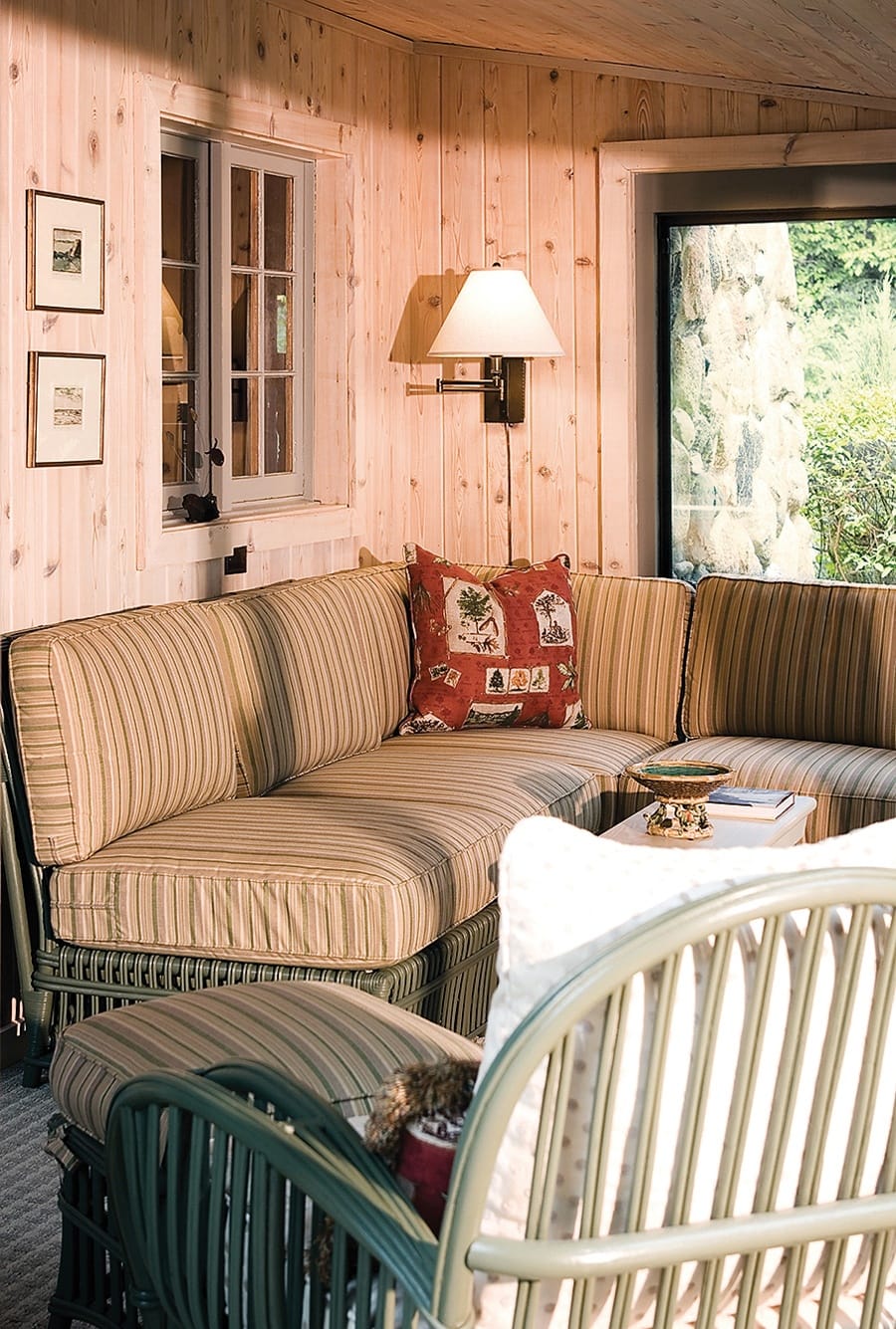 He finally settled on designing a separate structure, consisting of only a mid-sized master bedroom and adjoining bath, and positioned it about five feet back from the old cottage. A standard-width hallway connects the two buildings.

This hallway serves as a transition between style as well as space, meaning that the new rooms acknowledge but do not mimic the look of the original cottage. For example, the pine paneling in the new bedroom is used as wainscot beneath drywall, whereas the old cottage is pine from ceiling to floor. Likewise, the timber beams added to the ceiling in the new bedroom are bigger than those in the original living room.

The renovation did make one change to the old cottage: a tiny bedroom was converted into a bathroom/laundry room. Outside, a wobbly boathouse was demolished and replaced with a sturdy two-berth garage. “I wanted the addition to look like another cabin and the garage to look like one, too,” says the owner. “The idea is to have a family of little buildings.” 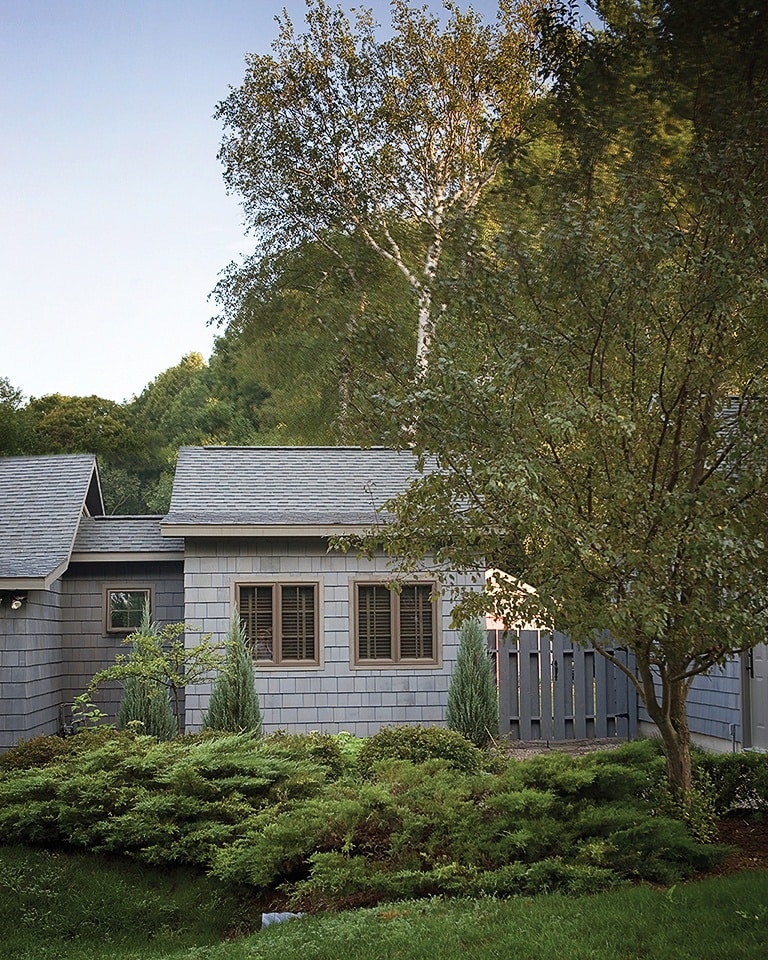 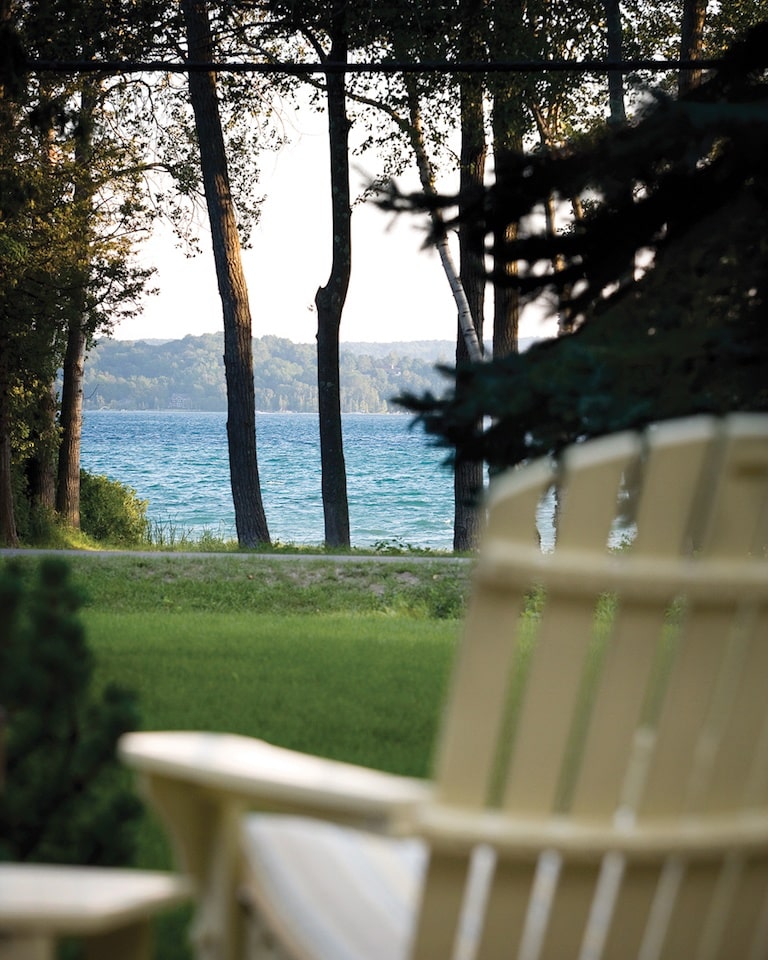 Since the major construction was completed, the new owner has had time to make smaller improvements, such as remodeling the garden shed. Beulah-based woodworker Steve Knapp has helped, building new doors and kitchen cabinets.

The owner, a retired New York City executive, has made a second career in the horticulture and garden design business. He cleared the overgrowth from the one-acre property, which actually sits across the road from the lake, and has been continually improving its gardens. Last summer, he planted a line of roses along the split-rail fence. 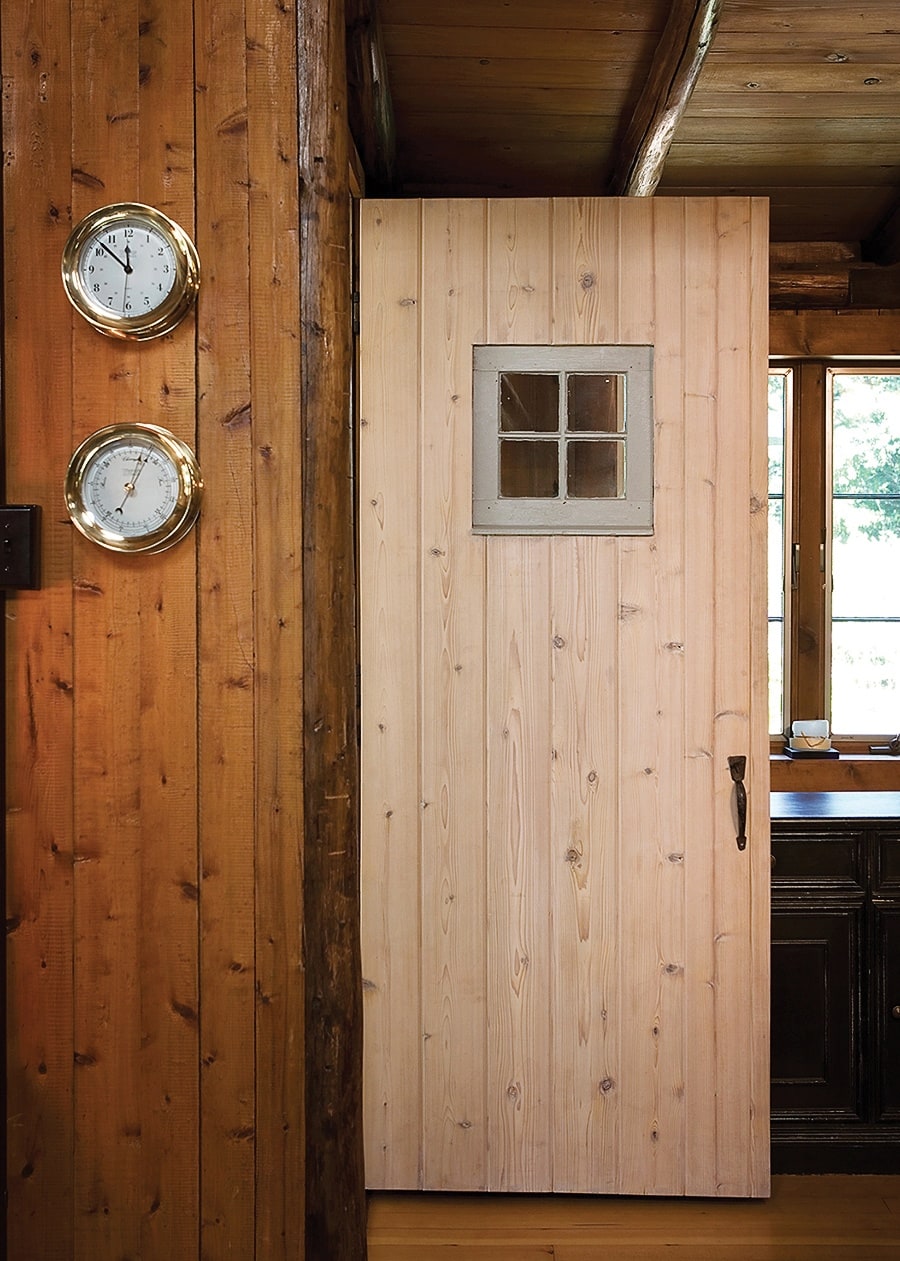 If delight is in the details, the doors of this cottage are sure to please. The front entry door welcomes guests with its tomato red paint and piques their curiosity with a four-pane window inset at eye level.

The door was custom-made by carpenter Steve Knapp, who painstakingly copied the cottage’s original back door leading out to the sunroom. Knapp made a similar door, also red, for the garden shed he rebuilt last summer.

Doors from the demolished boathouse were salvaged and retrofitted for the entrance to the new bedroom. The narrow doors, even narrower now and still with their old paint, swing open like they did on the boathouse.