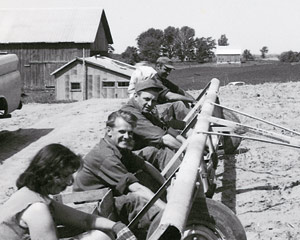 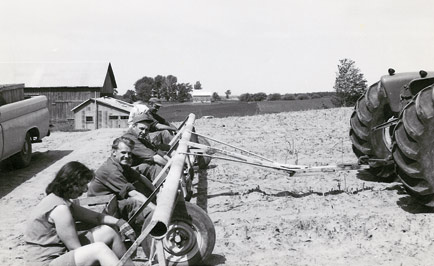 Our farm was in trouble. I knew because instead of purchasing new cloth at the yard goods store, my mother remade church hand-me-downs, something she had never done before in my short life. I knew because my parents’ voices, late at night, held tension as they talked over the old oak table, and because my mother was not happy when my father decided to plant asparagus—root crowns seemed expensive and those 10 acres might be used for a quicker cash crop. Asparagus, after all, took at least three years to mature.

But my father insisted. He had done reading that said it was a crop that would come into its own, that more people were going to eat it, and he had read about California farms with soil similar to the light soil here in Michigan. “But they have a longer growing season,” my mother argued.

“They make decent money,” he answered. Midwinter, with not a penny to spare, he ordered crowns. I remember separating those spider-like crowns on a cold April day in the garage.

I remember planting roots into deep furrows, with siblings and my mother—she was still recovering from mumps, something we had all come down with that winter. I remember the long days planting the field. In memory, my cold hands reach for a root from the basket, drop it carefully right side up into a furrow, tamp it down. I step another 12 inches, repeat the process down each long row. The tractor buries the furrows. My mother sighs like a tired wind.

The next year we sold the dairy herd and my dad, in a desperate attempt, bought beef calves.

I remember that fall, watching as the green fernheads of the asparagus turned color so that when the late October sun fell from the long west across them, they glowed like a prophetic bible picture. The dogs chased rabbits in the field and my brothers occasionally trapped one for supper. It was a field of shimmering beauty then. Still it would be another tenuous—and perhaps wasted—year before we could harvest a crop. That winter, the beef cattle caught a respiratory illness and several had to be shot. I wore the same winter coat for the third year.

Then came the spring we could pick it. We picked in baskets and buckets, which we dumped clumsily into bushels. Though the California magazine had said it should be knife-cut, we broke the green stems with our hands, close to the ground. We picked the field no more than a dozen times that year, and I earned ten cents a bushel, though I don’t think my parents could afford to pay me anything.

I knew, however, that something had changed because my father and mother took us camping the week after the last picking—in an old army tent without a floor. There was that small celebration, almost brazenness—Dad taking midsummer time to camp, my mother almost relaxed as she roasted hot dogs over sweet fire.

Once, she bought us white canvas shoes for play. It went like that. The market held, the price went up. Something each year signaled times were better because of the asparagus field—that early and immediate cash crop, that first vegetable, a sure sell.

Sometime later, Dad planted more acres and we picked more. My mother enrolled me in Catholic school for the first time, as a fifth grader—said tuition came from asparagus harvest. Though I was grateful, I suspect I was educated not so much by the good sisters as by the requirements of a field. I learned heat and dirt and inevitable work lessons in the weight of those green spears, in the scrapes on my knuckles. I grew up with the long-term risk it had taken to save the farm with this precarious crop from California, and with a sense of what a field—and family—can do.

Now, every spring, I find a U-pick field somewhere here in the North Country. I walk out into the dry rows, bend down, break single stems again and again until I feel my lower back ache, until my hands crease with juice and sand, until there is color on my arms and sweat on my face. I celebrate what it means to grow up on a farm that was saved by this unassuming green stalk. I remember, each time I break the green, how to judge its quality, and because it is resilient and tenacious—and in the fall, beautiful—how to judge my own.