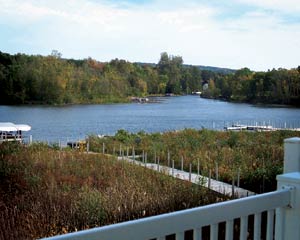 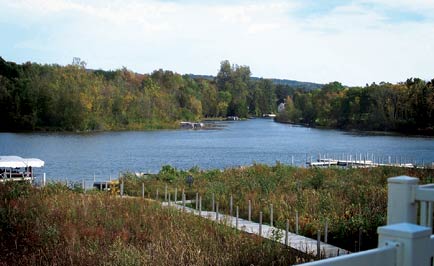 On a sunny, late-April morning, when spring warmth feels like it might finally, truly arrive in Northern Michigan, Jack and Virginia Hosmer, spouses and owners of a small development on Hanley Lake, stand on a plank walkway that leads through a narrow wetland to the shore. Beside the path, desiccated cattail tufts ruffle in the promise of a southerly wind. Redwing blackbirds flit from one perch to the next, staking territory and filling the air with their clear and confident trills. Fifty feet offshore, three fishermen in hooded Carhartts cast lures toward the Hosmers’ docks.

In one sense, this is just another beautiful morning in Northern Michigan. But actually, the two-acre wetland and the duplexes and triplexes that rise on the hill adjacent are a living, 3-D display of an unusual kind of success, the kind that can be achieved when environmentalists and developers listen to one another. Success for the developer is defined here as homes that are selling despite a sluggish market; success for the environmentalists is defined as expanded wetland habitat for plants, insects, animals and fish.

Hanley Lake Cove did not begin as a love fest between the developer and environmentalists. Back at the turn of the millennium when the Hosmers first proposed building 41 units on the site a short walk from Central Lake’s downtown, public hearings were jammed with people opposed to the plan. Locals didn’t like the Hosmers’ proposal to fill 1,340 square feet of wetland, and they complained that the proposed docks were too big for the intimate scale of the lake.

The Hosmers agreed to compromise. Instead of shrinking the wetland, they expanded it, shifting their site plan to accommodate. And they reduced the reach of their docks. With a mini wildlife sanctuary at the shore instead of a beach, the Hosmers added a large built-in swimming pool. And the customers responded with interest.

“When prospects come, they either like it or they don’t,” Jack says. “Some people want to know where the beach is and why the wetland hasn’t been mowed down, and others love it.” One resident bird-watcher has counted more than 100 species of birds in the wetland. People have seen foxes, deer and otters. “There’s a certain percentage of buyers who like that kind of environment,” Jack says.

By the summer of 2007, the Hosmers had built out the first phase of the development and needed to expand to the south. But to do so, they had to deal with yet another wetland issue. They proposed filling a .19-acre wetland that was separated from the lake by an old railroad bed and replacing lawn at the lakeshore with .21 acres of wetland.

Standing, now, at the edge of the wetland to be filled, Hosmer explains his plan, which essentially is to move the soils from the existing wetland to the new and slightly larger wetland. First they will scrape the top 12 inches of wetland soil and store it separately—this will become the seed bank for the new wetland. Next they will scrape the muck down to dry soil—this muck will also be stored separately. When crews excavate the new wetland, they’ll re-create the original soil state.

When Hosmer explained his plan to an official with the Department of Environmental Quality, the officer said he’d look more favorably on the request if Tip of the Mitt Watershed Council supported it. Rather than resist, Hosmer invited the organization to check out the plan, and quickly won their approval. Thinking back to the Hosmers’ proposal in 2002, Dr. Grenetta Thomasey, policy director with Tip of the Mitt, says, “This is an example of a developer [who], because of a lack of information regarding alternative approaches, was going at something in a traditional way. He ran into a big wall, a lot of opposition and a couple years of heartburn. But he emerged on the other side really getting it.”

“There’s a natural inclination among lakefront developers to stay as far from environmentalists as one can,” Hosmer says. “But I knew they were going to be present, and they’d be either friend or foe. I’ve worked with them and it’s worked for me.”