Take a video tour of the Sleeping Bear Dunes including the Dune Climb and Pierce Stocking Drive.

Be sure to check out the end of Page 2 of this article for additional links to info on trails, beaches, wildlife, camping, day trips and cottage rental listings. 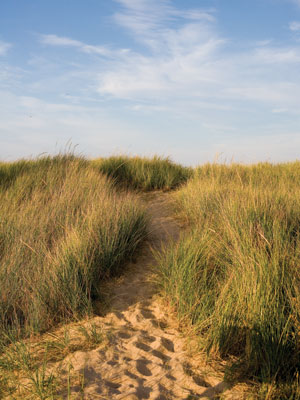 T he Sleeping Bear Dunes, now wrapped in the 35-mile-long Sleeping Bear Dunes National Lakeshore, have been the backdrop of my life. I have seen this landscape in all seasons and after decades of wondering its dunes, its coast, its lakes and streams and its historic buildings, I know many of its secrets—though I will never know all of them. Here are 10 "must-sees" on your next visit. 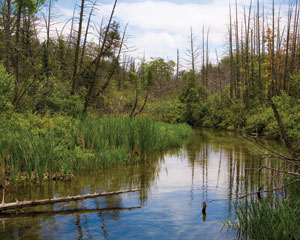 When the National Park Service removed a summer cottage at the mouth of Shalda Creek several years ago, this setting returned to its primeval sweetness. Walk along the stream as it eddies and flows through the forest to a sandy beach and sandbar that call for a day of playing in the lake.

View from the Treat Farm

After you’ve explored the Treat Farm’s old outbuildings (the cement thing that looks like a turtle is an old root cellar; the other circular structure is a garage—Charles Treat, who lived here in the beginning of the last century, was a farmer and an engineer), wander to the ridge above the water for a breathtaking view of Lake Michigan. Caution: Don’t try to run down the cliff, its clay-sand mix sends unsuspecting daredevils tumbling. But do climb to the top of Old Baldy (you can’t miss it) for a wide-open Lake Michigan view and an up-close-and-personal look at the Empire Bluffs immediately to the north.

Turn right on Norconk Road 1.5 miles south of Empire. Norconk dead-ends at the trailhead to the Treat Farm. It’s a half-mile hike through a lovely maple-beech forest to the farm and another half-mile across a field to the top of Old Baldy.

Want your sand dunes without crowds? Hop the Manitou Island Transit for South Manitou Island (or take your own boat), then embark on a sandy four-mile hike. The dunes on the island’s west side are your payoff. Great white flanks that tower 400 feet over the water—so high that Steve Yancho, chief of natural resources for the Sleeping Bear Dunes National Lakeshore, says he’s seen the glimmer of Wisconsin from them. Like their sibling dunes at Sleeping Bear, the South Manitou dunes have ghost trees. Yancho says old munitions from when the dunes were used for artillery practice during World War II turn up (very) occasionally.

In the 1880’s John O. Plank, builder of the Grand Hotel, purchased the property where the Boekeloo Lodge now sits, no doubt with plans for another grand resort. Plank never developed the property, and after he sold it, it became a cranberry farm and later a private lodge. The lodge, really just a cabin, sits on a placid, picturesque pond, but the real treat here is the Lake Michigan beach behind the cabin. A brisk 20-minute hike (long enough to keep the crowds away) yields, on a summer day, lonesome creamy sand and crème de menthe–colored water.

Take M-22 about eight miles south of Empire, and then turn west on Boekeloo Road. This two-track wends for a mile or so then ends at a parking area near the cabin. The trail to the beach is behind the cabin.