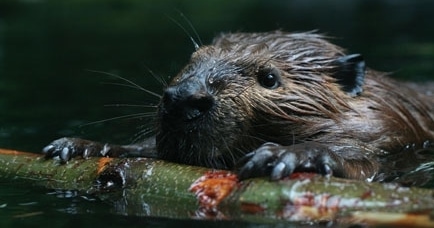 Who isn’t amazed by the industrious beaver? A little animal that can chop down a big tree with his mouth, dam a river, build a house, slap that wide flat tail to warn his pals? Makes our beloved dogs seem, well, kinda dumb. Here’s seven curiosities about Castor canadensis that will rekindle your wonder for these busy totems.

Naturalist Doug Fuller once saw a beaver dam studded with Petoskey stones. “I was way back on a small tributary to Black Lake and came across this large beaver dam that had a bunch of really nice, big Petoskey stones lined across the top. I thought, Who is back here lining Petoskey stones on a beaver dam? Then I realized the beavers were incorporating whatever was in their environment into their dam. There were many more stones tucked in among the sticks.” Fuller works for the Little Traverse Conservancy.

Experienced outdoors-folk know to purify water near beaver dams because it is often contaminated with the intestinal disease commonly called beaver fever, which is caused by the parasite Giardia intestinalis, also known as Giardia lamblia.

Sneak up quietly to these beaver dams, especially in evening, and you just might see the family at work.

Cadillac: From M-55, north on 31 Road to west on Forest Road 5381. Stop where the Brandy Brook stream goes under the road. See the beaver dam from the road. Bonus: also check out the osprey nest platform.

Petoskey: Put in a canoe at Bear River Road and float down to Evergreen Road (2.5 miles, about 2 hours). Float quietly, look for trees cut by beavers. You might have to drag your canoe over a couple of dams.

Honor: In the Sleeping Bear Dunes National Lakeshore, launch a canoe or small boat into Bass Lake and paddle south, scanning the shore for the large beaver dam that spans the creek between Bass and Deer Lakes.