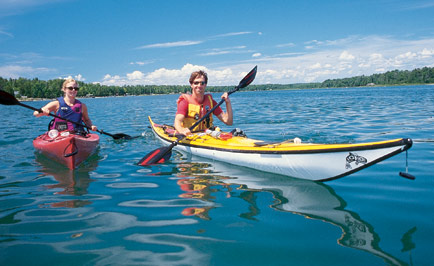 On the northern tip of Lake Huron, forty minutes east of St. Ignace, a string of islands called Les Cheneaux is woven with the inlets, craggy shorelines, reefs and crystal waters that make for dream kayaking. The 36 islands stretch for 12 miles between the Straits of Mackinac and the eastern edge of the Upper Peninsula, protecting the waterways from Lake Huron’s winds and currents. And though some of the most scenic marshes and sandbars are too shallow for motorized craft, they’re perfect for kayaks.

For an easy day of paddling, slip in at the public launch site off Lakeside Road about three miles east of Cedarville and at the island chain’s easternmost edge. Head southeast toward Lake Huron, but hug the shoreline of the mainland. The small marsh at the southeast tip of the point–jutting out into the island–is prime bird-watching territory. Before you head out to the islands know that all of them, except Government Island, are private, so feel free to look but don’t land. From the mainland, paddle past Strongs Island on your left to the southeast tip of Boot Island. Here, some of the biggest boulders in Les Cheneaux, some more than seven feet in diameter, jut out of the water like summertime icebergs.

Boot Island, like LaSalle Island to the west, is scarcely inhabited. Both islands make for prime bird-watching–look for bald eagles and listen for warblers. An array of painted wooden boathouses–testament to the area’s long wooden boat tradition–line the coast of Coryell. Government Island is a part of the Hiawatha National Forest, so go ahead and spread your picnic or even pitch a tent.

Hessel Bay Inn has a selection to fit just about anything that a long day on the water puts you in the mood for. The appetizer menu alone will do it–graze on escargot and oysters or opt for eight-layer nachos. The specialty here, though, is all-you-can- eat whitefish for $11.99. The atmosphere is light and airy, with wide window views of the marina. On a nice day, grab a table outdoors. 906-484-2460.

Amy Rushlow was an editorial intern at TRAVERSE.