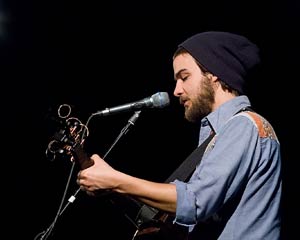 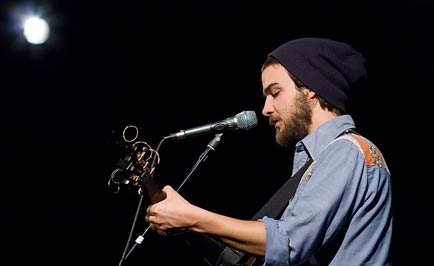 The inimitable Seth Bernard, one of the young talents at the forefront of Michigan’s music scene, recently released his newest album, This Here, at two CD release shows across the North. The shows, at InsideOut Gallery and Short’s Brewery, featured fellow Earthwork artists including “Daisy” May Erlewine and the band Breathe Owl Breathe, who also released a new album, titled Ghost Glacier.

“It’s been a heckuva process,” the 28-year-old Big Rapids singer-songwriter told us when we rang him to ask about the recording of This Here. “The entire process has been 18 months. There are 28 people that play on the album. We took a different kind of approach, it was more of a production — building an album rather than capturing a session. We’re real happy with it.”

Bernard says This Here is the first album in a two-CD conceptual project, with the second album coming at a later time.

“It tells the story of sort of a life and the different passages that humans go through,” he says. “It’s a way of telling my story and involving a lot of friends and comrades and colleagues and making it this companion piece for people as they live out their own stories. It was meant to kind of be a gift of music, in that way.”

Photo(s) by Photo by Drew Allegre