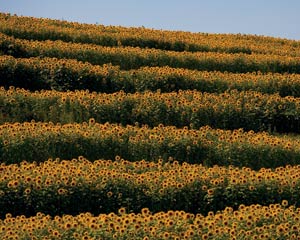 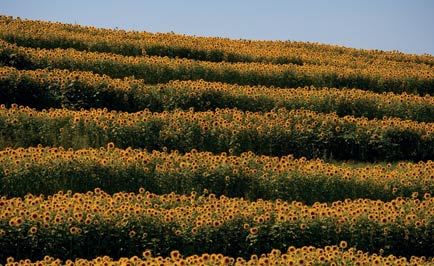 Sunflower field in a new development.

On a Saturday morning in mid-May, not long after green has replaced gray on the landscape and blossoms bloom in orchards all over Leelanau County, Jeffrey Hennig pulls his SUV over to the side of a road in Bay Hill development. “We bought these two lots,” he says. Arm out the window, he turns his palm to the sky and sweeps his hand to indicate the boundaries.

From this vantage point it’s easy to see what drew the interest of this 40-something landscape architect and his family. To the north, the land falls away in a long, elegant slope. In the near distance, Lake Leelanau extends in a graceful run to Leland. Today, the water is the color of ash and frayed. Dark clouds blow in from the Manitou Islands and dimple the surface with rain–a moody view, but captivating nonetheless.

Hennig concedes he acts on impulse and instinct, which accounts for how he ended up quickly falling in love with and buying this property. But not long after, while standing in a coffee shop in Leland, he learned that the development he’d bought into had been very controversial in the community. Many people feared that 50 high-end homes packed onto a high ridge and former 100-acre farm would be one more step toward what some call the Oakland County-ization of the North. “We were shocked and taken aback,” Hennig says. “We didn’t want anything to do with controversy; we came here to be peaceful.”

He knew what he had to do. Hennig runs a landscape architecture practice downstate, Environmental Artists, which caters to a rarified market of people who invest in the high six figures to the low seven figures in home gardens and landscaping. He approached the developer with a simple but dramatic plan to keep the imprint of agriculture in the development, which until recently had been a cherry orchard.

Using a design software program to make his point, Hennig modeled the entire development as if no changes were made. He pops open his laptop in his SUV to show the schematic–houses splayed across the hillside in a high-visibility jumble. “Look at the way this land rolls,” he says, again sweeping his hand. “It is exquisite. The homes have to be subordinate to the land.”

Hennig found a willing audience in the developer, McKeough Land Company, which quickly agreed to pay for sunflowers on acres designated to remain undeveloped common areas. (The township required that 50 of the development’s 100 acres remain permanently open space.) When late summer arrived and the sunflowers bloomed–Hennig estimates a million blossoms–children from Leland school harvested the flowers. “We sold them in buckets in stores in Suttons Bay and Leland and everywhere,” Hennig says. The money helped send kids to camp. “It was a real healing sort of thing,” he says.

Eventually Hennig would like to see vineyards replacing the sunflowers, or possibly interlacing the two. “I’m picturing a layering effect,” he says, as he goes on to discuss the geometry and shapes that people will experience as they enter the development and travel along the road. “The way things unfold in good garden design is like a movie.”

“You know, if you look at farms, you realize that farmers are some of the best landscape designers around,” he says. “The geometry of the farm is shaped by the hills, sunlight, the air flow, the water drainage. The houses too have this perfect geometry.”

Hennig secured a place on the development’s architectural review committee to help ensure that such principles guide the development here. Homes will hopefully hunker into the landscape, have organic rooflines, speak the language of barns. People often compare Leelanau to Napa Valley, and Hennig thinks a similar architectural philosophy can apply. “This is very much the trend in Napa Valley now,” he says. “People are moving away from glitz and opulence and giant homes and moving toward a very sophisticated rustic design done with smaller homes.”

Hennig says he’d like this approach–keeping the agricultural spirit alive and respect for the land strong–to take hold in developments throughout the North. But he doesn’t see his role as a member of a zoning commission. “I’d like to do this arm in arm with developers,” he says. “If we can convince the other associations and owners to be mindful of the overall theme of the place, it could become a really good thing.”Jeff Smith is editor of Traverse.
smith@traversemagazine.com