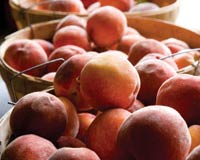 Whether you’re up-and-at-’em before fishing or rolling out of the sleeping bag after a night of beer drinking around the campfire, an Up North breakfast does a body good. Here are two of our favorites, beloved for warm small-town atmosphere and the real benchmark of breakfast: damn good bacon.

The blushing peaches in bushels at King Orchards are so sweetly irresistible that after I settle up at the cash register I always eat one on the spot, getting peach fuzz on my lips and an instant glow in my mood. King’s fruit stand is open every day in season (usually for three weeks beginning August 15.) M-88 between Eastport and Central Lake, 877-YES-KING.

On the shores of Gitchee Gumee, near the Two-Hearted River, a stone’s throw south of the blinking light on M-123 in Paradise, stop at The Berry Patch Bakery for a slice of heavenly, warm wild blueberry pie bubbling over with fruit picked in Lake Superior State Forest–only $3.50 a la mode. Baker Shirley Clark also makes caramel-apple-walnut, rhubarb, and cherry–but whatever you ask her for, she will call you sweetheart. 906-492-3330.

Bring a dish to pass for the potluck, and shop for produce homegrown from East Jordan to McBain, as Ana and the Lazy River Boys play live bluegrass, and enough corn for everyone boils in a cast iron pot. Thursdays from 3 p.m. to 7 p.m. through October. Springfield Recreation Area, five miles southeast of Fife Lake at Lund and Creighton Roads. 231-879-4249.

For one night every summer, Cross Fisheries’ June Cross carries on the whitefish dinner tradition her mother-in-law started in Charlevoix back in 1945 at her lakeside restaurant, The Nautical. Alas, The Nautical is no more, but at this community event and fundraiser at the United Methodist Church, all of Hulduh Cross’s best recipes–deep-fried whitefish with good tartar sauce, carrot salad, coleslaw, homemade rolls and lofty lemon meringue pie–live on. This year all dinner proceeds are earmarked for air-conditioning for the church. June 20, 4:30 p.m., United Methodist Church, Charlevoix, 231-547-2654.

The party pack for six comes with two racks of tender hickory-smoked baby back ribs, a pound of barbecue pork, a whole barbecued chicken, a quart of baked beans and a quart of slaw. They throw in the tablecloth, but we imagine that’s a little more civilized than needed for this peerless guy feast. 106 North James Street, Ludington, 231-843-6150. 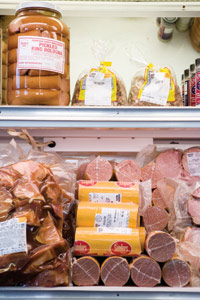 There’s relief to be found coming in off the summer sidewalk to the clean cool of Sanders Meat’s walk-in refrigerator and the giant freezer filled with fourth-generation specialties like long ropes of braunsweiger and Bavarian salami, homemade franks, country ribs, beef loins and butterball hams. Find a few fellow meat lovers–maybe right there in the cooler–to split a box of the subtly seasoned white brats, which come in parcels of 40, frozen. Throw them on the grill straight from that state and they’ll cook up perfectly juicy. 237 S. Main Street, Custer (just east of Ludington), 231-757-4768.

Sitting in a dreamy cafe with a good friend and a scoop of homemade frozen custard, the school year couldn’t seem farther away. 103 River St., Elk Rapids, 231-264-5585. 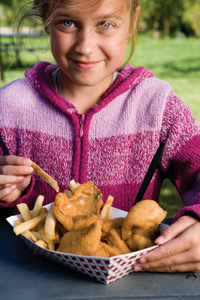 If you can take your eyes off the fish, you might notice that the strong-jawed German passing you your basket of fried walleye looks an awful lot like the man holding the chubs in the black-and-white photo on the wall. The Bortell gene is so strong, in fact, that five generations have caught and cooked up “Hot Fried Fish To Go” right from this very spot on the Lake Michigan coast. German Uriah Bortell was first, back in 1898, then came Charlie, Floyd, David and now Kris Bortell. Kris works side-by side with his mom, Joann Bortell, wife, Trish, and two children, Justin and Marietta, today serving ultra-fresh fish from both far and nearby waters.

Famed road foodies Jane and Michael Stern named the 110-year-old fish depot one of America’s Top Ten Seafood Shacks, of the ilk of The Clam Shack in Kennebunkport, Maine, and the Swan Oyster Depot in San Francisco. Bortell’s Fisheries seafood of choice is Great Lakes whitefish, but the menu also includes walleye, catfish, trout and smelt, all sold by the piece or pound, ready to take home or be fried to order before your eyes. Grab some old-fashioned wood-smoked fish or pickled herring for later and some hot fried smelt (cooked up tasty, fins, tails and all) or walleye (cut and fried in sweet, delicate strips) to gobble up immediately in your car or under the shade trees out front. The Bortells use the lightest, crispest dusting of breading and serve the fish in paper baskets with lemon wedges, paper packets of salt and pepper and little plastic peel-back containers of tartar sauce. They don’t take credit cards, so don’t find yourself as we did one day, scrounging for coins in the car cushions for one more round of smelt. Find more picnic tables across the road at the glorious Summit Township Park on Lake Michigan. The Bortells stay open through Labor Day weekend, until they sell out of fish. 5528 S. Lakeshore Dr., halfway between Ludington and Pentwater, 231-843-3337.

Grand Traverse Distillery just brought home a gold medal from the San Francisco World Spirits Competition for its premium vodka made with Michigan rye. Pour a couple of shots into this classic hot-day cocktail with a lovely fizzy, gingery bite. grandtraversedistillery.com

Stir vodka and juice together well in a copper mug or a chilled Collins glass. Add fresh ice and top with ginger beer. Garnish with a lime wedge. 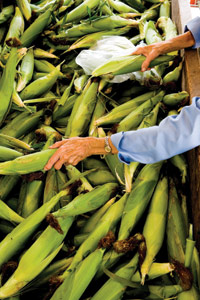 Shortly after 5 p.m. on August weeknights, a parade of cars pulls in past the silos at the cornfield of dreams on Long Lake Road. Older couples, home chefs and working girls with heels sinking into the dirt are all lured by the cornucopia in the wooden crate. Open daily in season 9 a.m.– 7 p.m., 8118 N. Long Lake Rd., Traverse City, 231-946-2985. Technique: Grab some choice ears by their silky tassels and prepare them in the same elote-style that Traverse City restaurateur Miguel Osorio does at summertime soccer club games. The shucked cobs are lightly charred on a hot grill, spread with mayo, sprinkled with sharp cojito cheese and sea salt, then soused with lime juice.