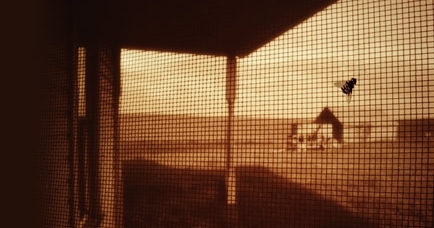 It takes them ten days.

When they are done, the wheelbarrow is not even sticky. Only when I run my finger along the edge and stick it into my mouth do I taste anything like the sweetness that belongs where so much sweetness has been. I look at this thing which was full and see an empty basin, and then I look back at the chipped siding of the house.

The day he returns, he is smoking and his hands are nervous. This time he brings the square white box with a black cover. He climbs the ladder, opens only one part of the clapboard, the place he left untouched the first time. He works very gently as he takes the queen of this wealthy hive and as many of the bees close to her as he can. He takes the combs in which she lives and the workers and places them into the square slatted box and lets the bees find her and gather around her until he can put his hand inside and they cover him with bee fur.

“That means they’re safe,” he announces to us. When he puts the cover on, their hum becomes mute. He closes the box and carries it to the open trunk of his car.

When this is done, he and my father open the side of the house again. My mother is there now, and on the porch benches she has spread newspaper and sterilized Mason jars. The men pull the boards. The walls reveal pale blonde, nearly perfect new honey. It shines. A few bees buzz frantically around their heads, but the men pull the combs carefully away from the inside lath of the house, picking out bits of plaster that cling to the new clumps, and they pass them down to my mother who, standing in the shade on the porch, packs them into jars, wipes the jars clean and seals them. The nearly thirty quarts of honey from the hive will sweeten our cereal and coffee for three years. Once, they hand down a comb dripping with clear syrup, “Nectar honey. It’s sweeter,” he says. “Off the top of the hive. Got more moisture and floral residue.”

My mother calls us and we come like puppies to the teat. She cuts the comb and hands us each a dripping piece. The rich amber floods my cheeks, and as I suck, I wonder what I am tasting. With each lick, it occurs to me that when they took down the honey, we could tell how old it was by the combs’ darkness, but now, all the years are blurred–the year Tom ruptured his spleen, or that Mike died, or the year we learned to swim. Was I tasting the year of the bumper cherry crop, or the year the apples froze? The year of my first communion? I realize all the summers I have lived run together in these golden combs. And I am just old enough to wonder if there is something wrong about the loss of the old islandlike combs. What does it mean to remove the order of years from inside the very walls of our house? What is it we suck when we suck this nectar, this honey from the top, this transformed syrup?

Though nothing bad happens for the rest of the summer, I sleep restlessly. I toss, longing for their hum. I have no words for why I wake at night or for why the dark feels sharper, the nights cooler, the leaves in the silver maple too shrill. The house is quiet, except sometimes I wake in the dark to hear the soft plunk as the last of the stray bees die in the hollow walls.