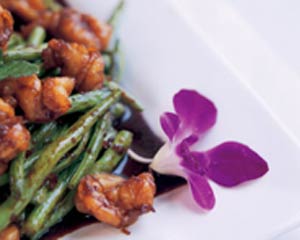 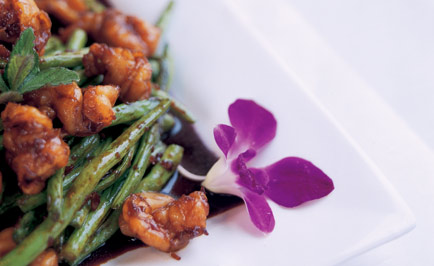 Shrimp Pad Prik Khing at The Fusion in Frankfort.

Classics like their shrimp pad prik khing, masaman curry and Bobbiesee’s mother’s recipe for crab rangoon will stay on the menu, and cooking classes by the Kus, who completed their final four classes from Hyde Park’s Culinary Institute of America this year, are in the works. “Asian steaming is not as hard as it looks,” Bobbiesee says. The Kus just finished a sleek and airy remodel of the former Rhonda’s Wharfside restaurant and added a lower level dessert bar and wine lounge, where they will serve small bites such as sweet sesame-seed studded Asian doughnuts, spicy chocolates and more. But what of the former Fusion space at 411 Main Street? Look for the Kus to open Tali Bistro & Bar, specializing in Italian, French, and Spanish cuisine by June 1.