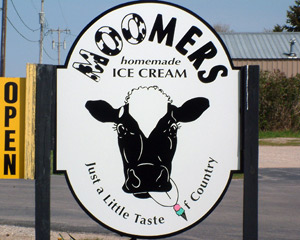 Contending with ice cream makers in cities like Sacramento and Boston, Traverse City’s own Moomers Ice Cream was recognized as one of America’s top four ice cream shops.

The honor comes from ABC’s Good Morning America Weekend, which asked viewers to nominate their favorite ice cream shop with an essay on why their local eatery is so unique. According to Jon Plummer, staff member and son of Moomers’ founders Nancy and Bob Plummer, it’s still unknown who submitted the entry that got them into the top four.

Moomers has been a Traverse City favorite in ice cream since Nancy Plummer, a former first-grade teacher, opened the store in 1998. Situated near farms and  orchards, Moomers’ appeal is in its beautiful rustic setting–and its delectable ice cream, made from the store’s very own dairy farm.

Since its beginnings, the store has shared its success with the community, retailing its ice cream across Northern Michigan and creating locally targeted flavors like “Cherries Moobilee,” a mixture of cherries, fudge and brownies. Now the community is returning the favor–friends of the family and fans of the ice cream alike came out on the type of warm, Tuesday afternoon made for eating ice cream. Moomers’ 3 o’clock rush began as usual, though a bit more of a spark was in the atmosphere, anticipating the local favorite’s national recognition. Parents smiled about the excitement coming to their hometown, while young faces painted in the colors of their favorite flavors grinned from enjoyment of the chilly treat.