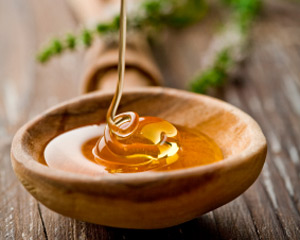 Sucking on an ice cube to heal the throat, drinking a cup of hot tea — there are a lot of homespun remedies to fight off allergies. There may be a different, and sweeter, alternative however — a bit of raw local honey. “People say it does help,” said Kirk Jones general manager and beekeeper at Sleeping Bear Farms, “I have had a lot of people tell me it helps with allergies.”

And Jones should know. He’s been making honey at the Farms in Beulah, MI, for 30 years. In addition to harvesting a variety of honeys, such as raw and star thistle in the Grand Traverse area, Jones is also producing Tupelo honey, a rare honey gathered in the swamps of the Florida panhandle.

In addition to being a sweet treat for the summer, the honey those bees are so busy producing can also be used for a variety of medical maladies, ranging from the topical treatment of wounds, such as staph infections, burns and boils, down to swallowing it with a bit of lemon juice to soothe a laryngitis sufferer. Because the honey contains a small amount of hydrogen peroxide, it can effectively kill bacteria. But beyond those applications, raw honey is simply good for you, Jones said.

“Just honey consumption really is good for your immune system and digestion,” he said. “It’s good for digestion, and some medical reports even suggest it can lower cholesterol.”