Where to Hear Frogs Sing in Spring 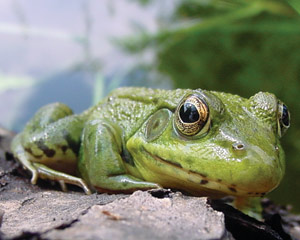 The raucous cacophony of a pond full of amorous frogs conveys the urge and surge of spring life like few things in nature. On evenings in April, May and June, find a quiet gravel road through a wet swamp, park the car and roll down the windows. Indulge in the riotous choir.

Here’s what you’ll hear and when, based on experience shared by Traverse City frog aficionado and frog census-taker Mike Gill. But first, know this: Frogs don’t have a calendar,” Gill says. “They go by the weather.”When small lakes are half-melted (roughly late March to mid-April): Listen for two frogs: the western chorus frog, which sounds like a fingernail running over the teeth of a comb, and the wood frog, which sounds a bit like ducks quacking. Know that these frogs sing for just a week or so.

As nights begin to warm to 45 degrees (late April, early May): The peeper frog comes on strong, like a billion sleigh bells jingling in a steady rhythm. Peepers sing for several weeks. About the same time you can also hear the American toad, which emits a long, unbroken trill.

When the mosquitoes come out on 60- to 70-degree nights (about mid-May): Listen for the gray tree frog emitting its series of short trills. About the same time, the northern leopard frog announces its desires with a deeper quack or croaking.

When it finally feels like summer is near (warm nights in late May): The green frog adds its single croak. Many people think this is a bullfrog. Could be, but bullfrogs are scarce in the North.

Get frog-song savvy. We admit it, written descriptions of sounds are not nearly as effective as hearing the real thing. Get rock-solid on your frog calls by ordering a copy of The Calls of Frogs and Toads, a book and CD by Lang Elliott. Listen to sound samples here. $19.95, Horizon Books, 800-587-2147.

Keep your frogs singing. Frogs can sense the presence of fish in a body of water, perhaps through scent. And since fish eat frog eggs and tadpoles, frogs wisely seek water that is fish-free — typically smaller wetlands. “But small wetlands are the ones most likely to be filled by development,” Gill says. “People talk about chemical threats to frogs and other stuff, but the one thing I know for certain is that when you fill a wetland they have no habitat for mating. The frog song stops.” Do the obvious thing—keep the wet in your wetland.

Be a frog surveyor. Join Michigan’s team of frog census takers—hundreds head into the swamps each spring. Everything you need is available and explained on line. Go to Frog & Toad Survey.