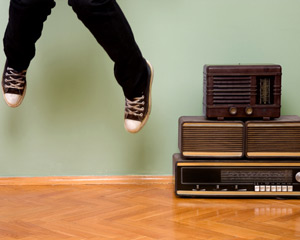 For those of us not lucky enough to live there, the sounds of Mackinac Island music scene are now just a click away, thanks to Radio Mackinac, a new Internet radio station.

From rock to bluegrass, contemporary to jazz, the station will feature a little of everything, while celebrating the rich music scene of the island, featuring music from national acts and local artists, such as saxophonist Alex Graham, featured artist and band leader at Grand Hotel.

In keeping with the station’s local focus, Radio Mackinac hosts a variety of programs skewed to events occurring on the island; one show features artists who will perform at the roots music-flavored Mackinac Island Music Festival, and another showcases the artists of Grand Hotel’s upcoming Labor Day jazz weekend.

But that’s not to say the station only plays local artists–acts from Billie Holiday to Led Zeppelin are also featured, but with a twist. Rather than the usual hit parade, Radio Mackinac not only plays B-sides and lesser-known album tracks from national artists, but also gives listeners a choice in what they want to hear: listeners can rate music on a scale of zero to five stars, and if a song dips below two stars, it’s bounced from the play list.

With 3,500 hours of music, Radio Mackinac gives listeners the taste and feel of the island, without the ferry ride. Check it out at radiomackinac.org.