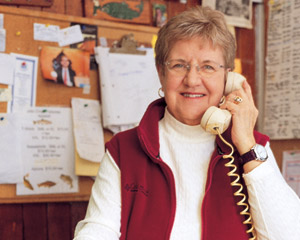 June Cross runs the John Cross Fisheries, a Charlevoix institution since 1945, with her husband, Jack Cross Jr., and their children, Kellie Sutherland and Jack Cross III. Cross suggests keeping the adornments for fish suppers simple to let the flavor of the fish shine through (“for whitefish I use lemon or lime, or dry white wine”) and she ensures it remains moist and flaky with her oven technique (“425 degrees, middle shelf. When the fish starts to turn the color of milk, turn on the broiler to finish it”). Here’s more from Cross, including her secret ingredient for fish boils.

What’s your favorite way to eat your whitefish sausage?

It’s really good in split pea soup. I take half of the pepper sausage and half of the regular. Chop it up, put it in carrots, onions, garlic and a half-teaspoon of ginger. I put ginger in my fish boil recipe, too. It’s the secret ingredient that gives it a little zing.

Your mother-in-law, Huldah Cross, was a Charlevoix restaurateur.

The Nautical was strictly fish—no one could figure out how she did it, but when she pulled the fish from the deep fryer and put it on paper towel, it didn’t leave an oil mark. She served whitefish, trout, hush puppies, carrot salad, fresh fries, lemon pies, lemon bisque. It closed in 1971.

The best accompaniments to a whitefish dinner?

My husband always likes coleslaw—I use half coleslaw dressing and half ranch dressing. I’ll do potato casserole or redskins. And my mother’s creamed peas.

Your mother taught you to cook?

My parents had a summer resort for fishing and hunting in Canada, east of the Soo. It was an old lumber camp they converted during the Depression. Families came to Frontier Lodge from all over the world—Ireland, Scotland, Michigan, Chicago—and they loved my mother’s cooking. She made homemade bread and apple pies on the wood stove.

Stop by John Cross Fisheries for fresh and smoked fish, whitefish sausage and smoked fish salad. The Crosses will pack your order on ice to get it home. 2090 Belvedere Avenue in Charlevoix. 231-547-2532.