Build Your Cottage in a Day 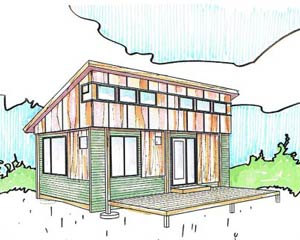 In a time when gas prices hover at $4 a gallon and the cost to heat and power a home continues to rise, building and maintaining a big cottage may not seem feasible–and that’s where Cottage in a Day comes in.

Specializing in small, energy efficient homes, Cottage in a Day serves up an alternative to the average hideaway, featuring a smaller floor plan (from a simple 14-by-14-foot, to a 14-by-28-foot “L shape” that replaces the smaller unit’s stock loft space with an attached bedroom), and a heavier emphasis on going green.

In an effort to limit the cost of heating, the Cottage in a Day homes are constructed with structurally insulated foam panels–four-inch foam board placed between two sheets of wood–and fitted with Energy Star rated windows and appliances in order to keep the environmental footprint low.

Speaking of footprints, the cottages hardly leave one–rather than being built on traditional foundations, the Cottage in a Day is built on concrete “piers,” which require only a 2 by 5 hole in the ground as opposed to a full basement. But not to worry, packrats, there is still a 16-inch insulated crawl space beneath the house for storage.

Because of its modular design and simple foundation, the Cottage in a Day can be built anywhere or used for anything, says Kim Bazemore, design associate for the company. “It can be a home, a hunting lodge, a cabin, a guest home and artist studio, migrant housing, disaster relief housing, anything,” Bazemore said. “It’s an alternative to sprawling homes people can’t afford.”

Because the house is attached to the piers, it also has one feature your average home doesn’t–mobility. Moving? Don’t like where your cottage is placed? It can be picked up and moved to where ever you like.

The name is no joke, either. So long as you’ve already made the arrangements to connect to city utilities, a Cottage in a Day can go up in, well, you get the picture. To check it out, call Cottage in a Day at 231-946-7741.