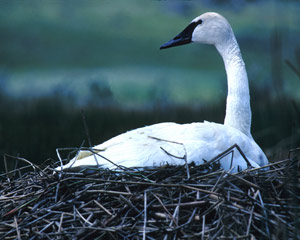 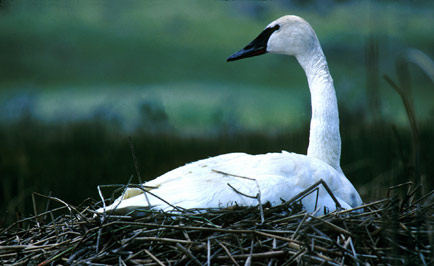 As the last sheets of ice melt away on the inland lakes of Sleeping Bear Dunes National Lakeshore, wildlife biologist Ken Hyde reports some great news on the bird front – the spring return of trumpeter swans that were released in the park during the past two years. "I have reports of two to four of them flying around with I.D. bands on," Hyde reports. The reintroduction of the trumpeters is another success in a years'-long effort to reestablish the trumpeter in the state. The bird was eliminated from Michigan back in the 1870's due to market hunting, and in 1918, when the Migratory Bird Treaty was signed, there were only 70 trumpeters known in the entire lower 48 states.

With the demise of trumpeter swans, mute swans, an invasive species, moved into Northern Michigan and proliferated. They produce in much larger numbers and have hurt native birds by consuming large amounts of food, especially subaquatic plants, and dominating habitat.

Wildlife biologists hope that bringing trumpeters back to Michigan lakes will help keep mute swan numbers down, says Mark Knee, a wildlife biologist with the Little River Band of Odawa Indians, in Manistee, the tribe that secured the grant that paid for the 14 trumpeters that have been introduced into Sleeping Bear. The tribe has introduced a total of 32 in Mason, Manistee and Benzie counties thus far. "Last year we had our first confirmed nest," Knee says, "which is pretty incredible if you consider there probably hasn't been a trumpeter swan nest in Northwest Lower Michigan since the mid-1800's." Statewide, trumpeter numbers have climbed to about 750, but they are still listed as a threatened species by the Michigan Department of Natural Resources.

A trumpeter doesn't nest until reaching four to six years old, and the Sleeping Bear swans are just now approaching that age. To spot a trumpeter, Hyde suggests going to Empire and scanning South Bar Lake, right near town. With its wingspan of 7 feet, 4-foot height and weight of 21 to 30 pounds, the trumpeter is one of the largest birds. "It's just wonderful to watch them fly, they're so large and elegant," Hyde says. "And it's nice to know they are supposed to be here."