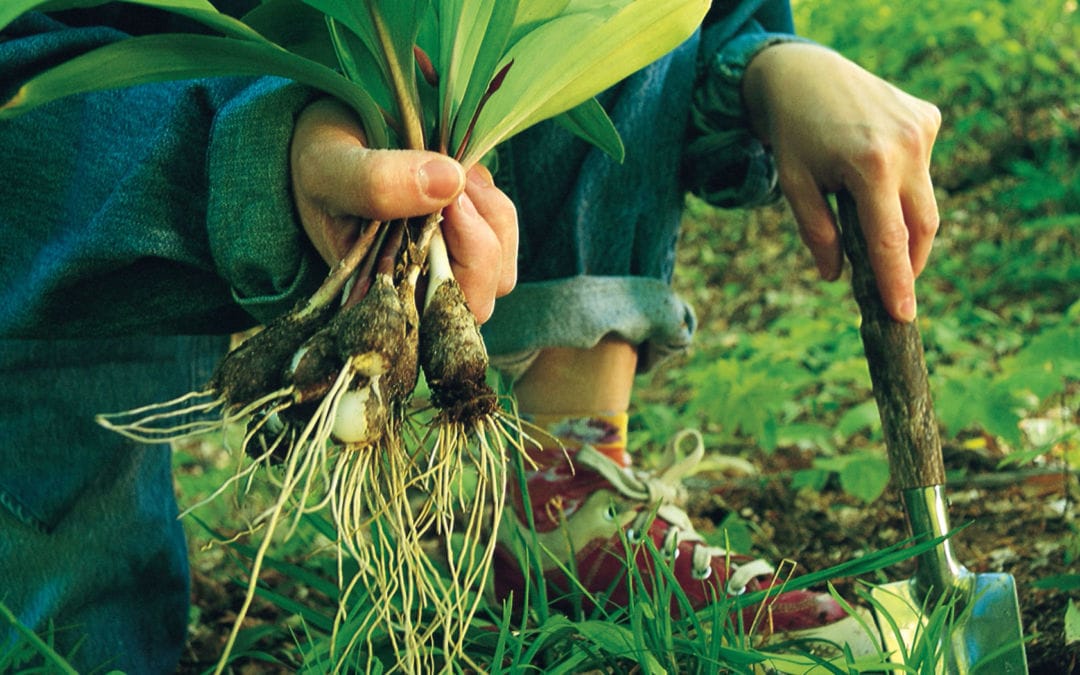 A mysterious scent wafted through the air on my first walk through the woods near my new Northern Michigan home. With every step, I caught the strong yet strangely pleasant aroma of an earthy Italian kitchen. “Do you smell onions?” I asked my hiking companions, and we all looked around, confused.

Days later, my daughter reached down, cupped her small hands around what looked like a pair of tulip leaves and pulled. Out popped an unmistakable cousin of the green onion, only slightly rounder, plumper and more graceful. The floppy leaves were attached to a snow-white bulb by a thin magenta stalk, and the mystery was solved. We had leeks. Hundreds of them carpeted our rolling hills, a showy backdrop to the delicate trillium and tiny lady’s slippers dotting the landscape. What looked at first like a simple forest groundcover would become the promise of spring, since leeks are the first sign of green to pop up through late winter’s dirty snow.

[How To: Harvest, Clean and Store Wild Leeks]

These days, my son and his friends run up and down hills, grazing on raw leeks on patches of land they’ve named Leek Mountain or Leek City. My daughter assembles dramatic bouquets, and presents her gift as proudly as she would an armful of prized orchids. I put the bouquet to my nose, breathe in the pungent aroma, then get to work on a flavor-filled springtime soup–a simple potato, leek and broth mixture that tastes so flavorful, my guests insist it must be full of exotic herbs.

A celebrated staple dating back to the days of the Pharaohs, leeks were eaten daily by Roman Emperor Nero to keep his voice strong–a nod to Aristotle’s belief that leeks were responsible for the pure, clear coo of the partridge. Early Native American settlers in the Midwest (and later the region’s European settlers), used leeks as a lifesaving source of Vitamin C after a long winter without fruits or vegetables. They also treated coughs and colds and even bee stings with wild leeks. Whether they saw the plants as a delicacy or necessity is a matter of conjecture, however. The Menominee called the wild leek pikwute sikakushia, or skunk plant. They gave the related name Shikako (skunk place) to one Lake Michigan settlement where leeks grew in abundance–a place now known as Chicago.

But we can credit pioneering forager Euell Gibbons for elevating the leek’s modern culinary profile–by simply cooking them. Some 40 years ago, he proclaimed the leek the sweetest of the wild onions. Perhaps nowhere is the bulb embraced more than in the American south, where the appearance of the Allium tricoccum–known there as the ramp–is celebrated. People flock by the hundreds to ramp feeds, ramp romps and ramp cookoffs. The spring treat (generally served whole and fried) is so popular that the National Park Service outlawed picking in the Great Smoky Mountains to save the plant from extinction.

The mild flavor complements other spring treasures like the morel, and it’s often paired with cream sauces and goat cheese, even served atop pizza or fried with potatoes. Try them alone, even raw if you dare. Or enjoy this delicious recipe for potato and wild leek soup, as we did, after a glorious day of foraging in the sun-dappled springtime woods.

In a large skillet, fry bacon until crispy. Set bacon aside. Add leeks and potatoes to the skillet; fry on medium-low heat until leeks are tender. Sprinkle with flour; stir until flour is absorbed. Stir in chicken broth and simmer until potatoes are tender. Stir in cream and heat thoroughly. Add crumbled bacon and salt and pepper to taste. Garnish with chopped leek leaves if desired. Serves 4-6.