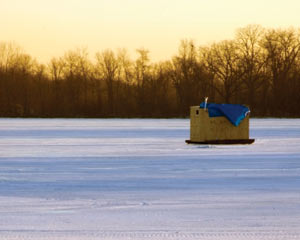 When it finally happens, there is no mistaking the scent of the first spring winds, a mixture of dirt and honey and the delicate tinkling and melting of millions of slivers of ice on Green Lake. I remember one winter when I was 6 years old and the lake thawed facet by facet. My father called me down to the shore where we watched islands of ice grind against one another, blown by the winds. As they broke, they filled the shoreline ankle-deep with tiny ice crystals. My mother watched, warm behind the window with the video camera, while we took fistfuls of those crystals and threw them into the air over our heads, watching them catch the first glints of real sunlight any of us had seen since November.For Green Lake’s reluctant-to-call-the-season-done ice fishermen, those sportsmen who measure their happiness in the inches of ice that have built up on the lake, this scene comes at a cost. All too often they wait too long, and their shanties sink to become boats that must be paddled home, or find a resting place across the lake on someone else’s beach.

I have never actually been inside of an ice shanty, although a few winters ago, after rereading Wanting Only to Be Heard, a favorite of mine by Jack Driscoll, I put on my layers and walked across to Green Lake’s eastern shore, where a few hundred yards out, a fishing village is built each winter on the ice. I watched men, and every once in a while a woman, pulling sleds filled with fishing gear, followed by dogs and children running and skidding from one shanty to the next. I stood at a distance, taking in this subculture, which I knew so little about. I listened to the voices inside, a mixture of fish-talk and the recounting of old stories and laughter, and often, absolute quiet. I looked back across the lake to houses where telephones were sure to be ringing and televisions were undoubtedly on; the ice village felt completely removed, almost surreal, a different existence altogether.

I understood then why it is that so many ice fishermen want their shanty to be the last one left on the lake, a demonstration of the toughest love of all. This reluctance to acknowledge the end of the season is an alternate universe to the one my family and I inhabit when the snow begins to set in and it’s time to close up the cabin for winter.

So I have made my bets, when the temperature has dropped down to zero, the wind chill well below that, and there are still lights flickering inside a few of those polar dens, as to which shanties will be the last to go. Inside those four walls I have imagined someone bundled in wool and down enduring their chapped lips and frozen toes, for the fish, yes, and for the warm bed that is to come.

A few winters ago I watched as our neighbor, wearing his wet suit, just in case, maneuvered his boat through open channels in the ice to retrieve his sinking shanty. My father helped as they got a rope around the disappearing hideout (“lassoed” as my mother later described it) and then dragged it safely back to shore through the widening passages.

These diehard fishermen hold out against the softening snow and ice that’s thawing into slick reflective pools from shore to shore. I have seen their shanties catch the wind and blow from one end of the lake to the other, as if free to skate on the grandest rink of all, pulled by invisible kite strings. And their owners, chasing after them straight into spring.

Jaime Delp is a writer living in Traverse City. dejaimien@gmail.com